Nördlingen Germany, a walled city along the Romantic Road, is not to be missed. Located near a Roman settlement on the road north from Augsburg, Nördlingen was a very important stop on the Via Claudia Augusta trade route from Italy. The local fair was one of the biggest on that route.

By the way, the Via Claudia Augusta trade route is now an international cycle route through southern Germany, Austria, and Italy, also running through Switzerland for a short period. Doesn't that sound like a fascinating trip? My Germany bucket list keeps getting longer!

This is a list of things to see when visiting Nördlingen, but it's certainly not exhaustive. You could spend a day or two exploring this quaint city in Bavaria.

The town wall and fortifications were built in the 14th century. Take the self-guided tour around the wall. You'll see these windows every so often, all in the shape of a cross. 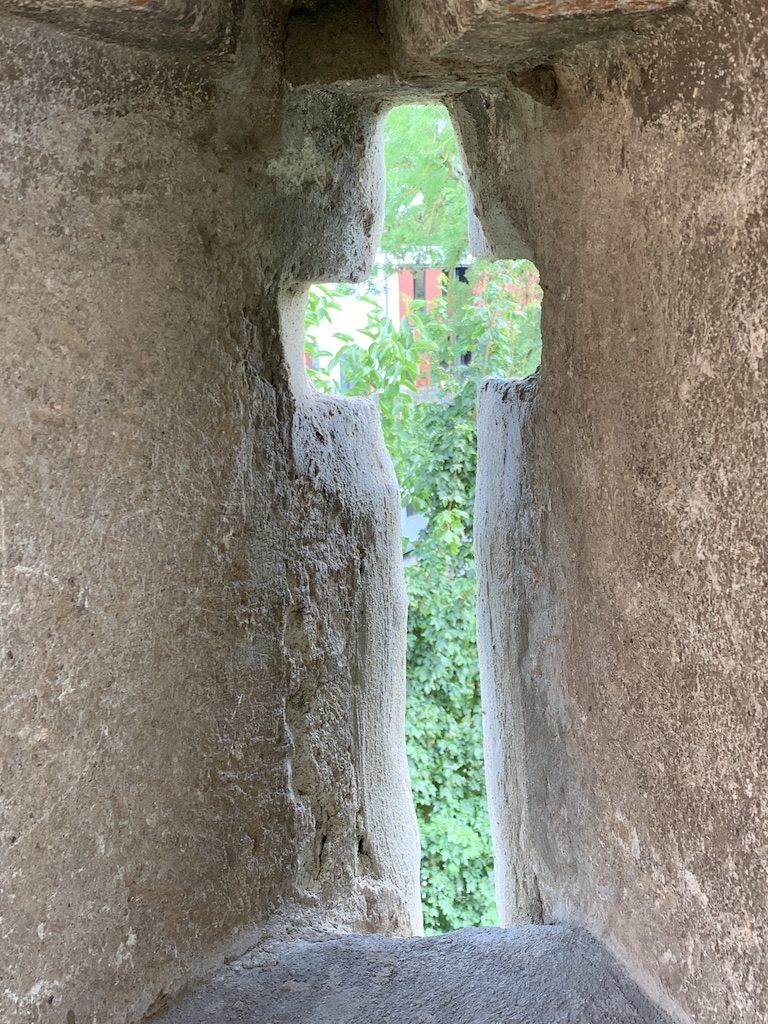 You can walk all the way around, or climb back down the short flight of steps at a couple of points. 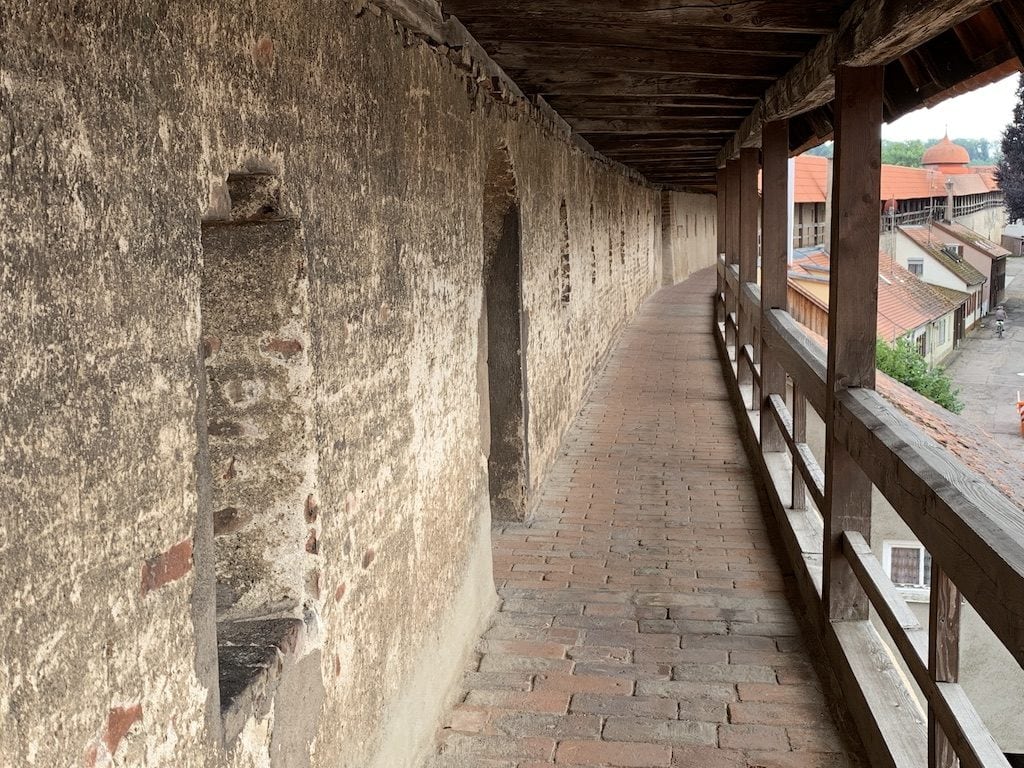 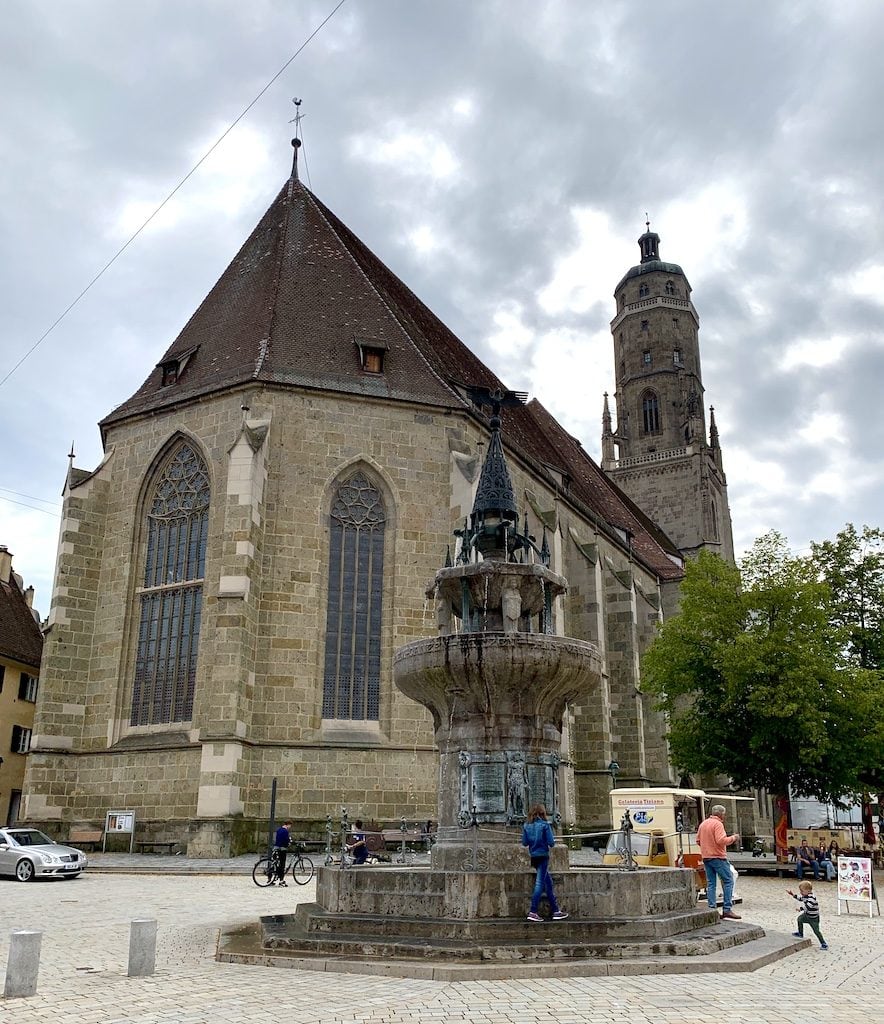 Almost 15 million years ago, an asteroid, said to be about 1 kilometer in size, accompanied by a satellite mass that was about 150 meters in diameter (think about that for a moment), crashed into the German highlands. The impact created what is now known as the Nördlingen Ries and the Steinheimer Basin.

The crater at Nördlingen Ries is the most preserved in Europe, and you can see the effect from the top of Daniel Tower, next on this list. You can also visit the Ries Crater Museum.

This photo is the best example I can give you of the crater as you can see the higher elevations in the distance. Nördlingen basically sits within the crater. 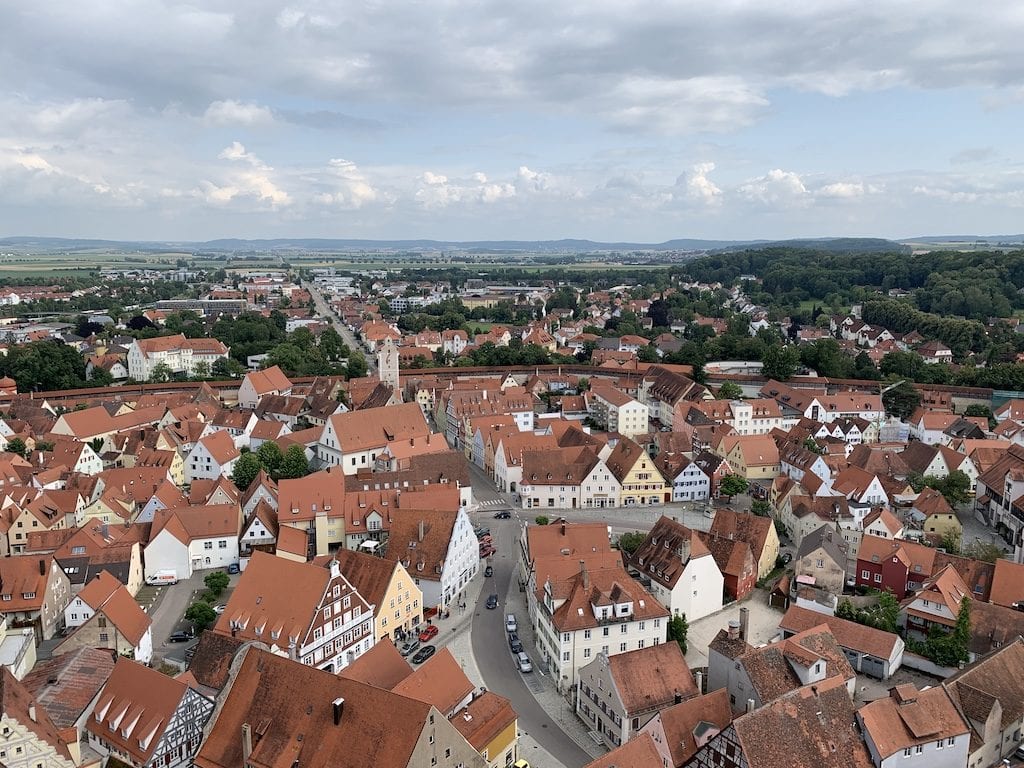 If you do nothing else in this beautiful city, climb the 365 steps to get to the top of the Daniel Tower. The Tower was built in the 15th century from stone created by the meteor impact. This tower is where watchmen kept an eye out for intruders.

I’m not going to lie, it’s not easy. The steps begin as stone, then change to wood, and they get more narrow as you go. However, you can stop now and then. The platform where you can view the wheel is a good place to stop. 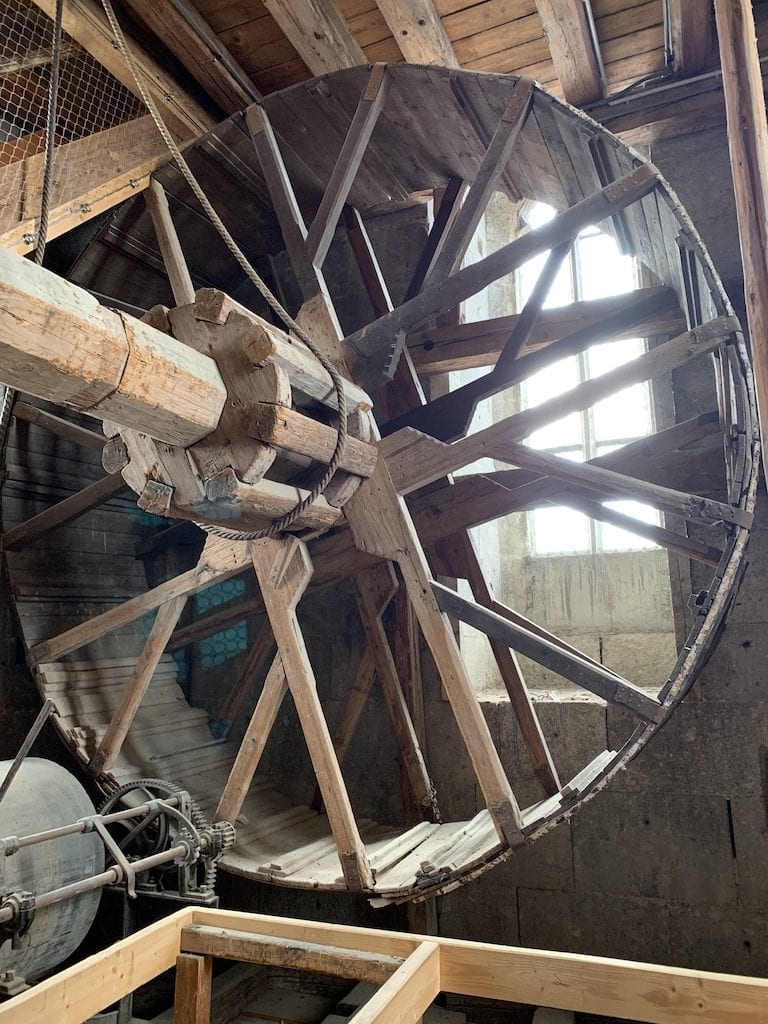 The bell is a beauty, too. 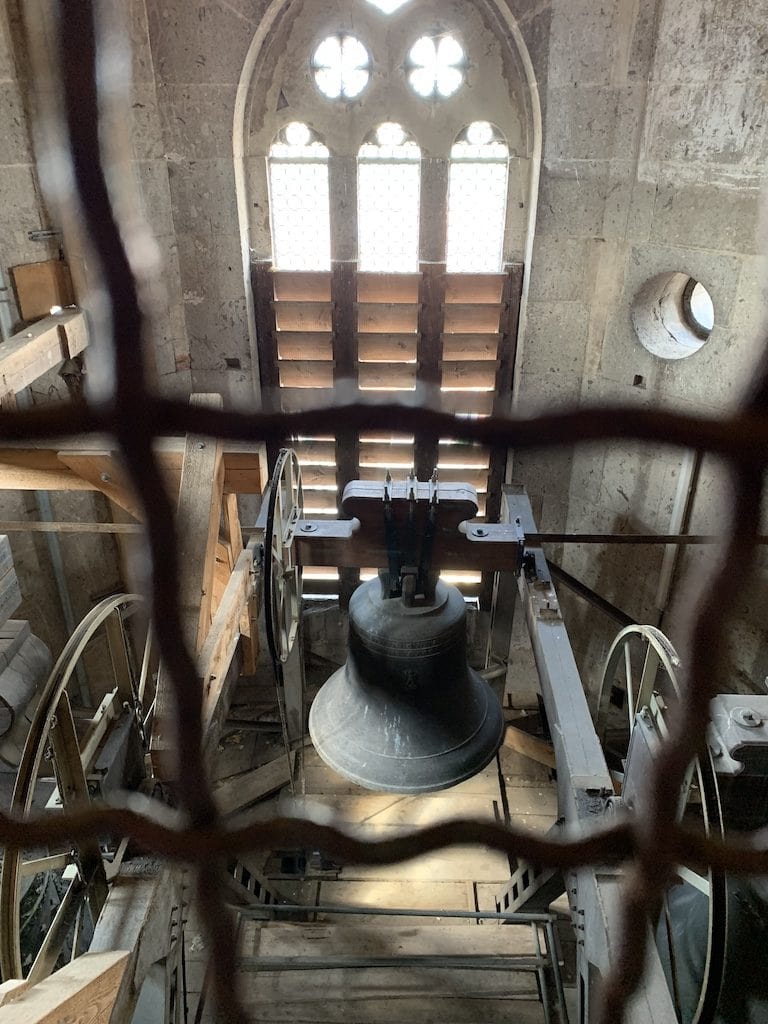 People can pass you if you need a break, and seeing everyone else out of breath (except the kids- oh, for youth!) makes you feel a little better.

Ask those on their way down, and they will all say it was worth the climb. The view is magnificent. 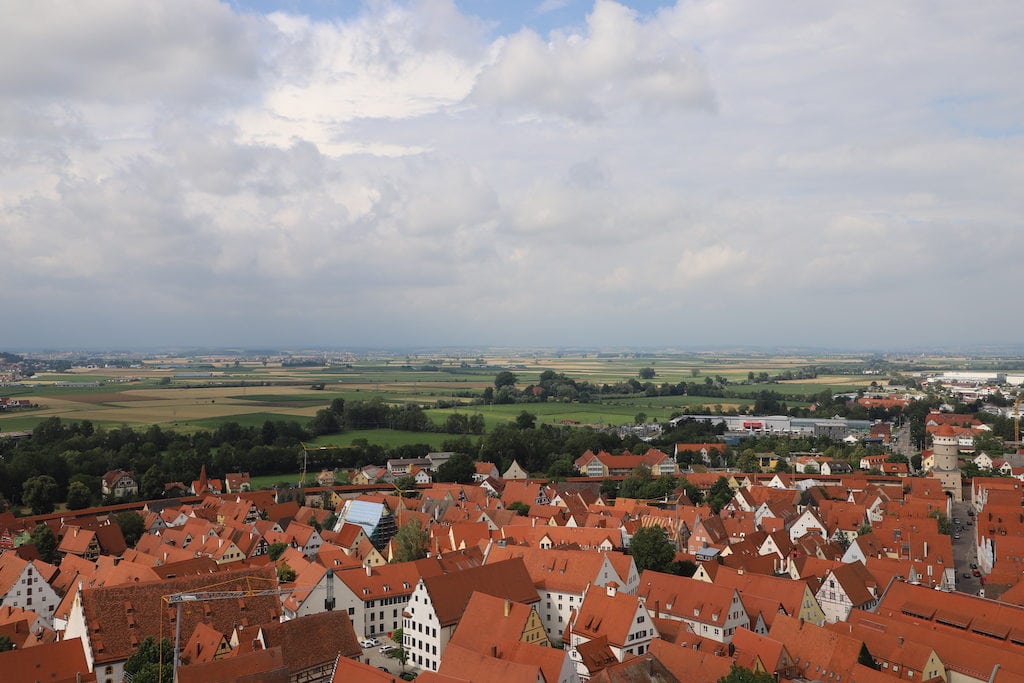 You'll pay at the top where you'll also find a small souvenir table. Walk around the tower to get a view from all sides.

It's really so beautiful, and a great place for a selfie. My husband is the king of selfies! 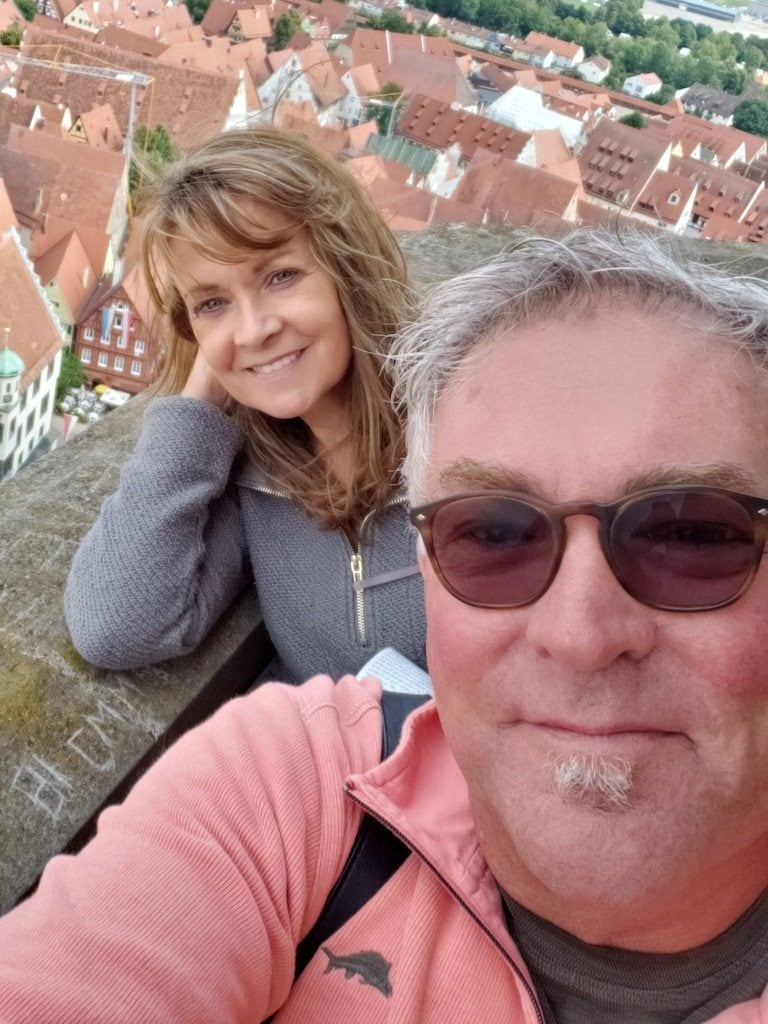 You'll find the Town Wall Museum in the Löpsinger Tower. The museum is focused on the history of the fortifications of the city. 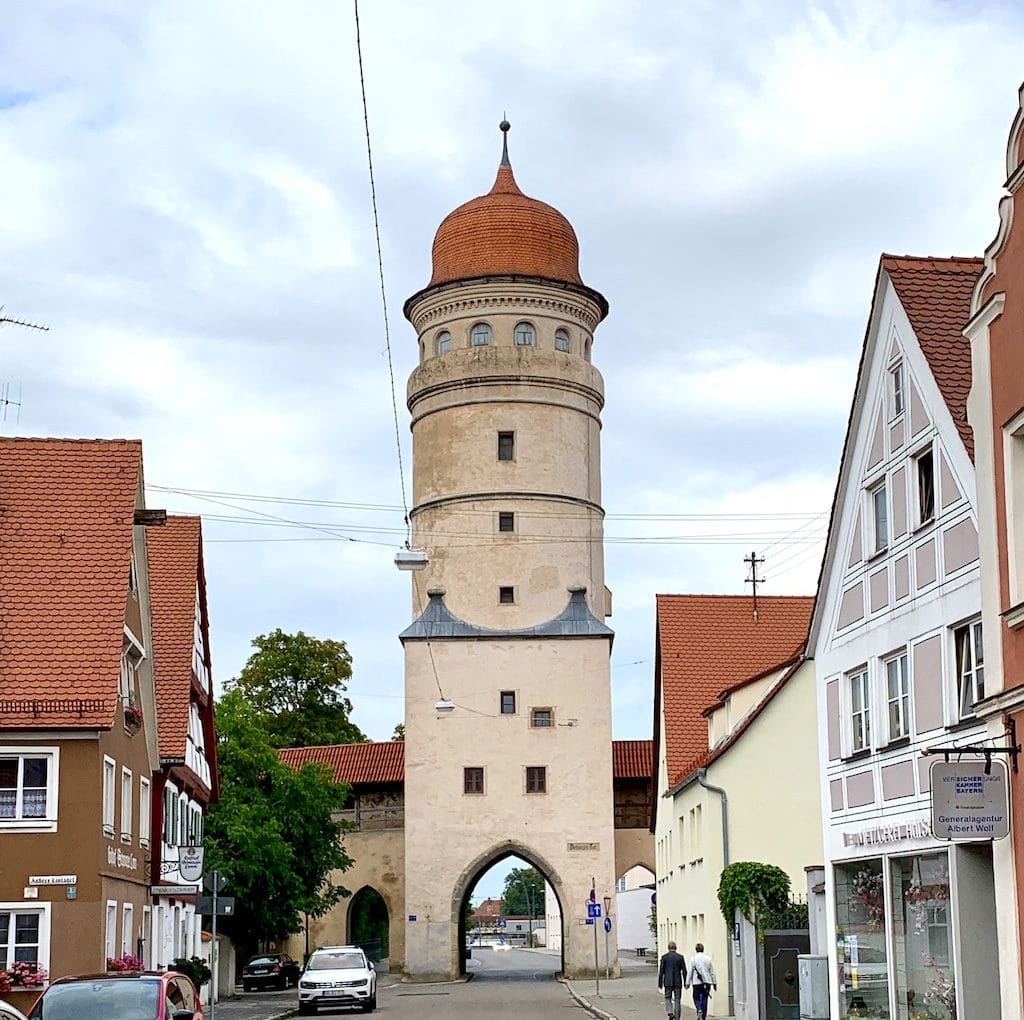 Located near the Ries Crater Museum, the Town Museum gives insight into the economic growth of Nördlingen over the years.

Nördlingen also has quite the gastronomy scene, so this is a great stop for lunch or dinner. In fact, Meyers Keller has 1 Michelin Star! This gourmet authentic restaurant is very committed to the farm to table approach, using only the freshest ingredients available.

Meyers Keller has a summer festival in August that just might be worth building your trip around if you're a foodie like me. Chef Jockl Emperor also holds cooking classes, so visit the website if that's something you'd like to do.

The Old Town of Nördlingen is charming and you'll find many shops and restaurants to visit. The building to the left in the photo below was built in the 15th century and has been a trading post, a so-called Tanzhaus for entertaining important visitors, and even a venue for bakers to sell their baked goods. Now, there are small shops on the ground floor. It's a gorgeous building.

Across the street is another historic building, the town hall. Originally, this was where the Counts of Oettingen resided. The city took possession in the 14th century and the building has remained the town hall ever since. You can see the dome of the Renaissance-style staircase in the back.

Stop for a bit and have one of those delicious local German beers. Can you imagine what this city was like 500 years ago?

If you're driving, follow the signs for the Romantic Road instead of listening to the GPS or Siri. Some areas have not been updated and the drive is more beautiful along the suggested route.

Rent a smaller car if you can. Some streets are narrow and it's easier to maneuver a smaller vehicle. Pay close attention to street signs! If you don't know ask. We found many one-way streets in the smaller towns.

There is a Christmas market in Nördlingen that begins November 30 and runs through December 23. See Tourism Germany’s website for times and activities.

Wear flat-soled shoes or tennis shoes. Many of the walkways are cobblestone. Lovely, but not with boots, even with a low heel.

Have you been to Germany? Traveling the Romantic Road is a great way to see this part of the country. We also loved downtown Augsburg.

« Exploring Downtown Augsburg
Things to Do in Rothenburg, Germany »
698 shares