Downtown Augsburg, Germany has a lot to see. You may be planning to travel the Romantic Road, or perhaps you’ve just read about Augsburg – one of the oldest cities in Germany – and want to visit.

I was invited to take a trip on the Romantic Road, and my only wish is that I’d had more time. The lively city of downtown Augsburg offers enough activities to spend at least a couple of days.

I’m sharing a few highlights from our trip, as well as a couple of places we hope to see on our next visit. Isn’t time always the problem when you’re traveling? 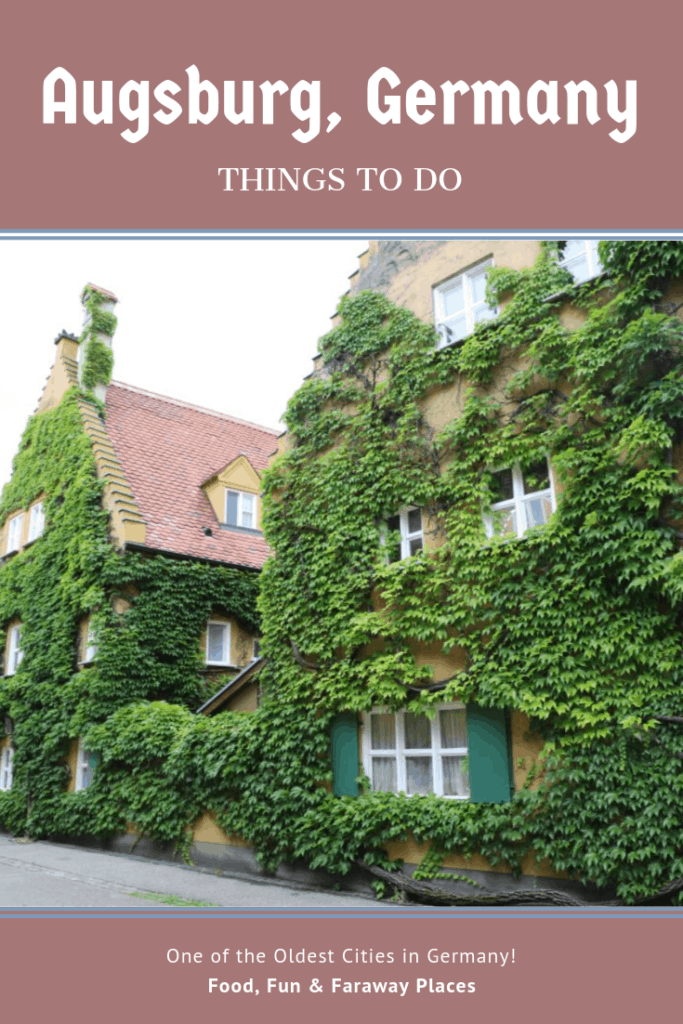 Our first stop in downtown Augsburg was to see the Fuggerei, the oldest existing social housing complex in the entire world. This beautiful city inside a city is absolutely charming.

Learning about the history of the Fuggerei was sobering. This community has been through so much.

The Fuggerei was founded by Jakob Fugger the Rich in 1521 as a settlement for those in need, and the residents who live there today still pay less than one Euro per year.

The most famous resident was Franz Mozart, great-grandfather of Wolfgang Amadeus Mozart, who was born in Augsburg. 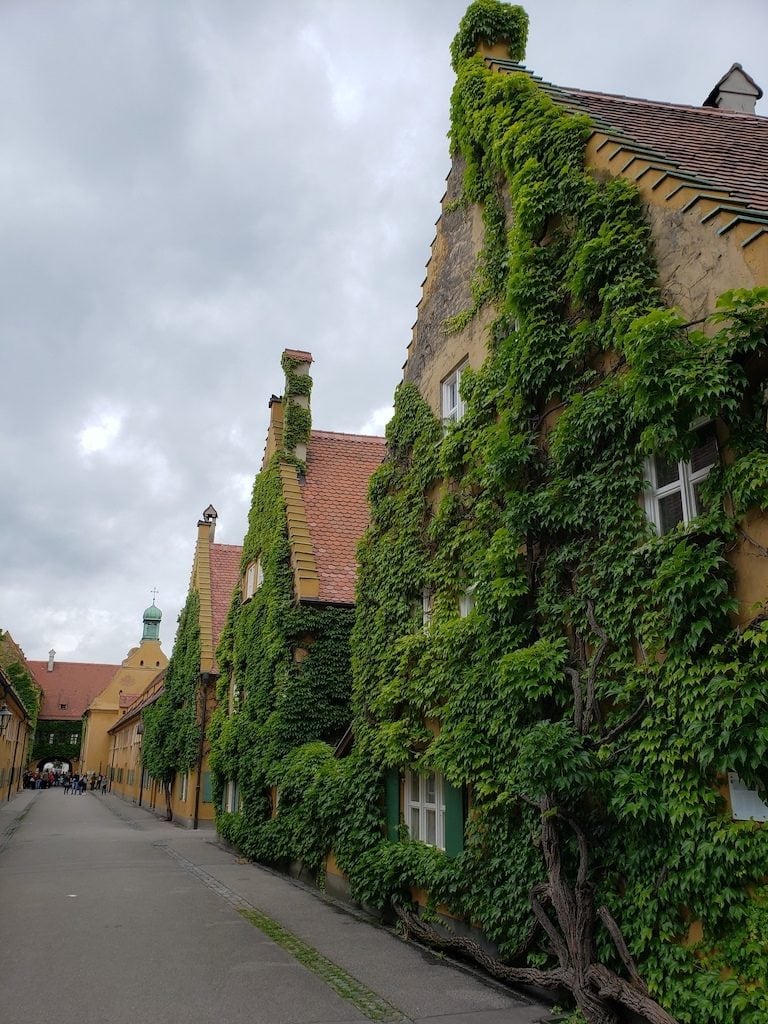 There are 67 terraced houses, each with two apartments, as well as a church.

Fun fact: The strings hanging from the doors are doorbells, and very few are the same. I'm wondering if you're able to ring one on a tour. Let me know if you do! 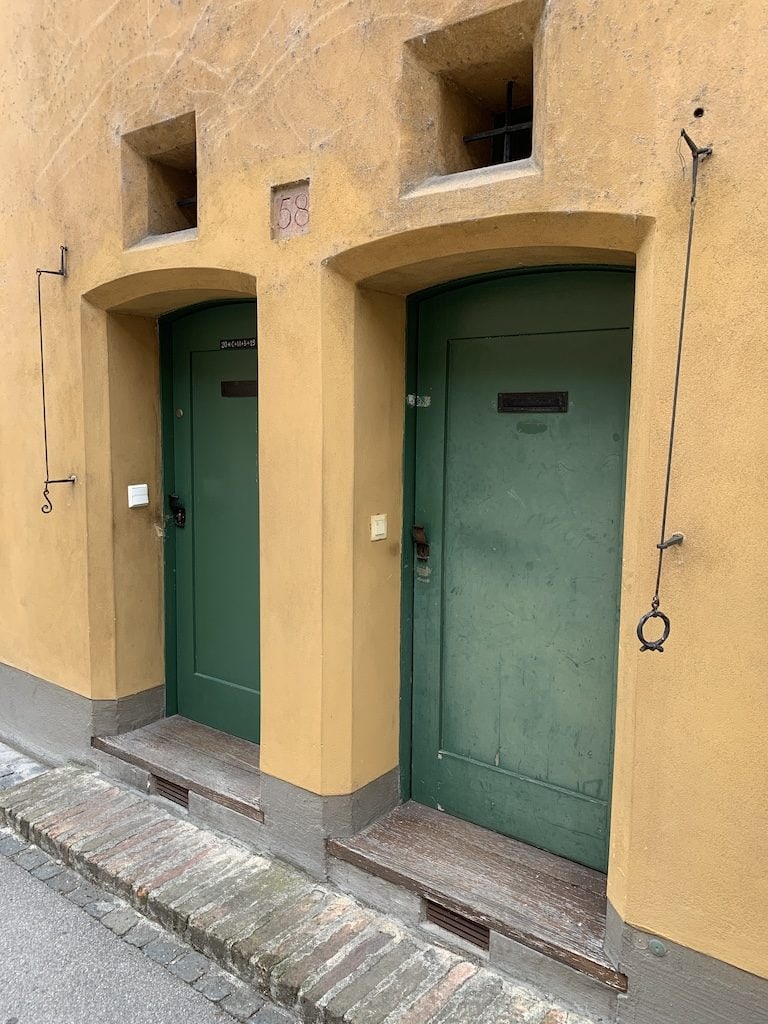 You'll find a cast-iron fountain at the intersection of the Fuggerei. It's believed a wooden fountain was built here as early as 1599, which was the main source of water for the settlement.

This fountain, made of iron, replaced the wooden one in 1744. 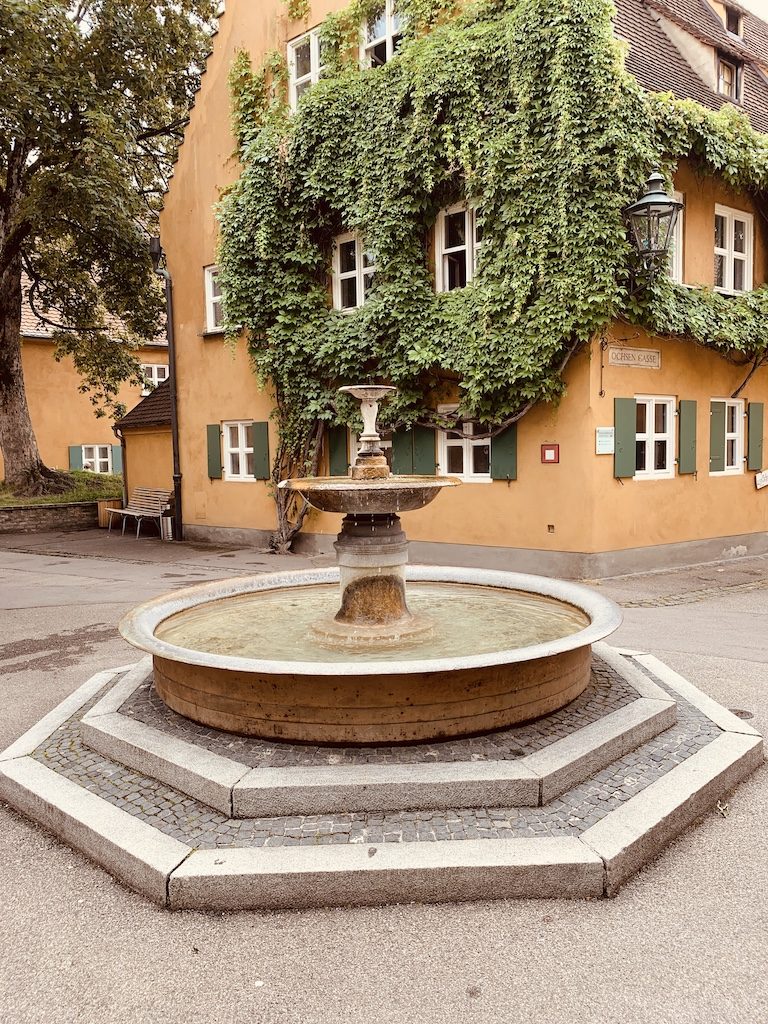 The residents collected fresh water from the hand-pump wells. 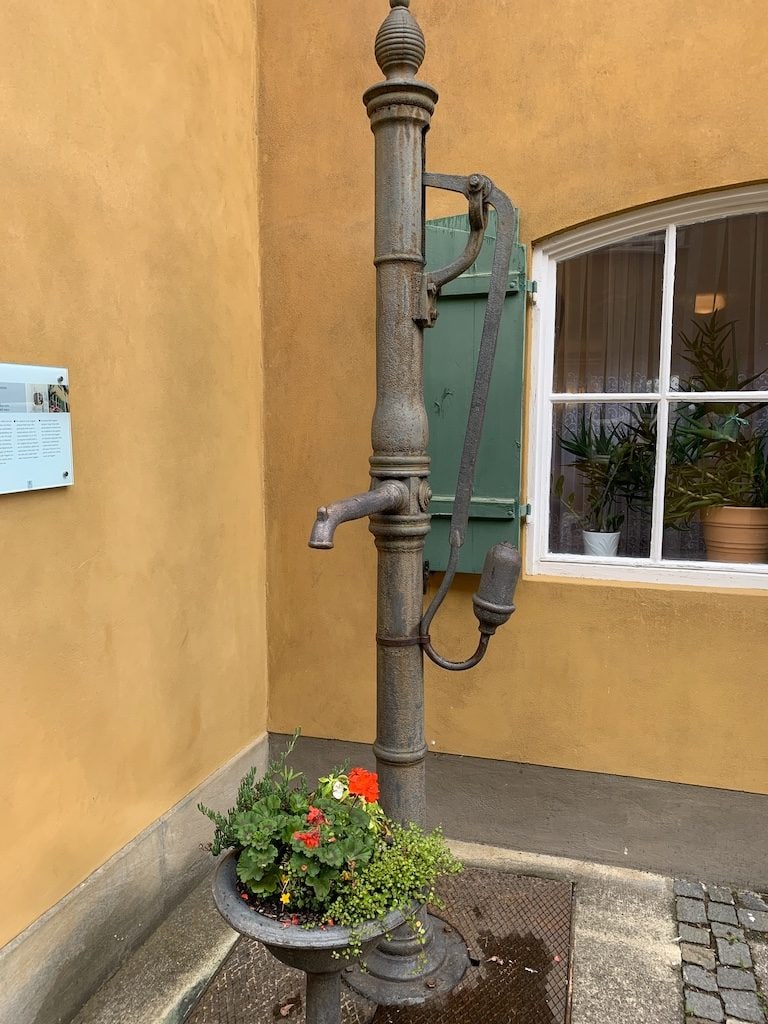 In the 17th century, more than half of the residents of the Fuggerei were lost due to the Thirty Years’ War, hunger, and plague.

In 1944, almost half of the buildings were destroyed because of the bombing raids on Augsburg. The residents were safe because a bunker had been built. 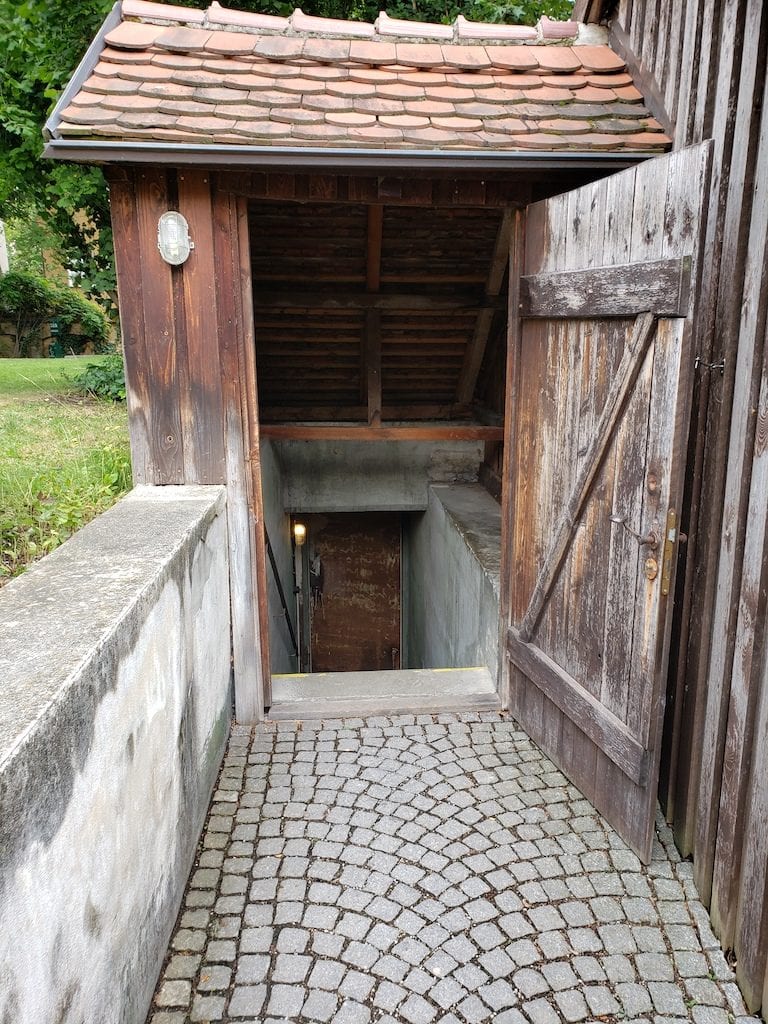 If you visit the Fuggerei, be sure to go down into the bunker to learn more about what went on during World War II. The exhibit, The Fuggerei in WWII - Destruction and Reconstruction, is beautifully presented. 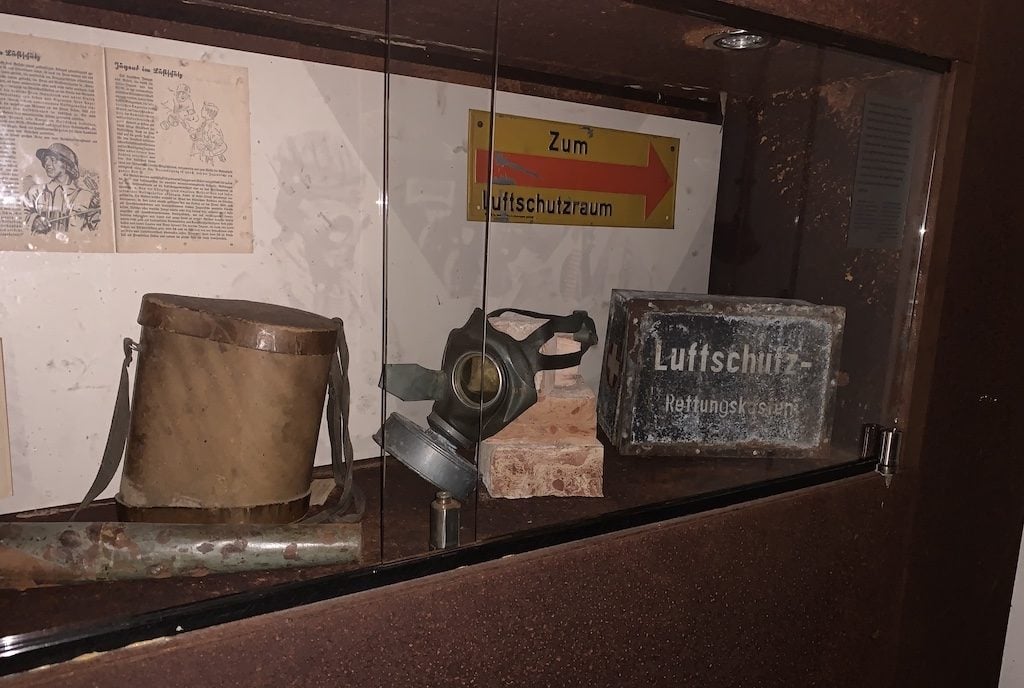 After the war, this settlement was rebuilt, and the Fuggerei grew even larger. The stories show how strong this community is during times of trouble.

If you are planning to visit downtown Augsburg, this is a must. In July of 2019, the Augsburg Water Management System became a UNESCO World Heritage Site.

The structures in place for running water and supplying drinking water dating from the 15th century to the early 20th century earned Augsburg these accolades. 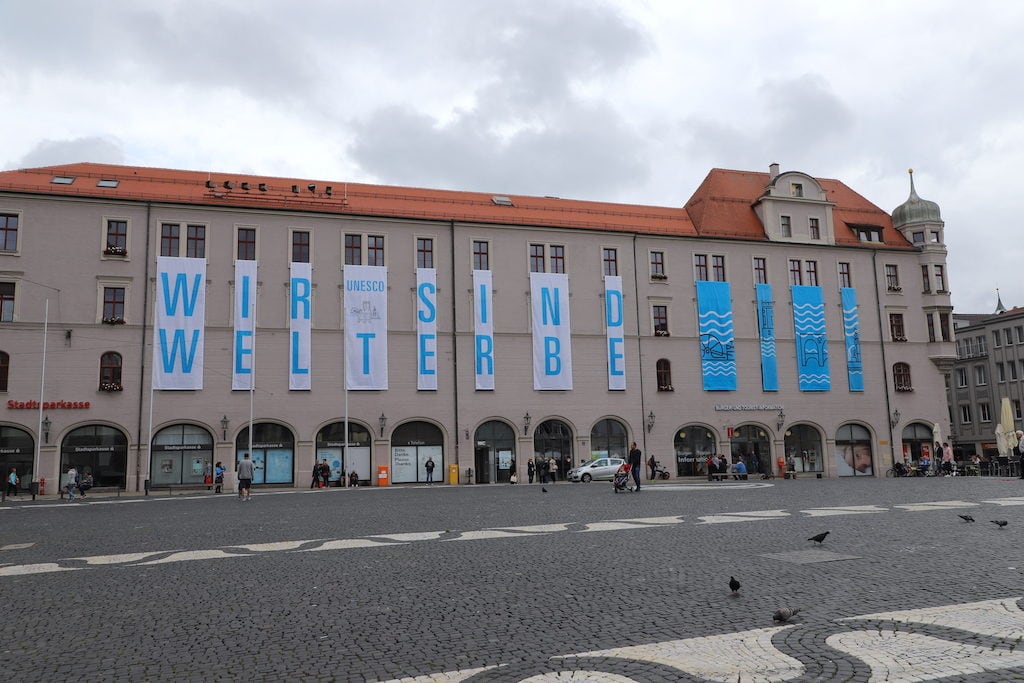 The facilities include the oldest water tower, as well as the oldest waterworks in Germany. The Augsburg Water Management System is located in the heart of the city, so take some time to explore.

Note: The Augsburg Water Management System is closed on Saturday but is open on Sunday.

Augsburg Town Hall, built between 1615 and 1624, replaced the original Town Hall constructed in 1385.

Considered to be one of the most important secular buildings of the Renaissance north of the Alps, this hall is both a historic landmark and a functioning town hall for the people of Augsburg. 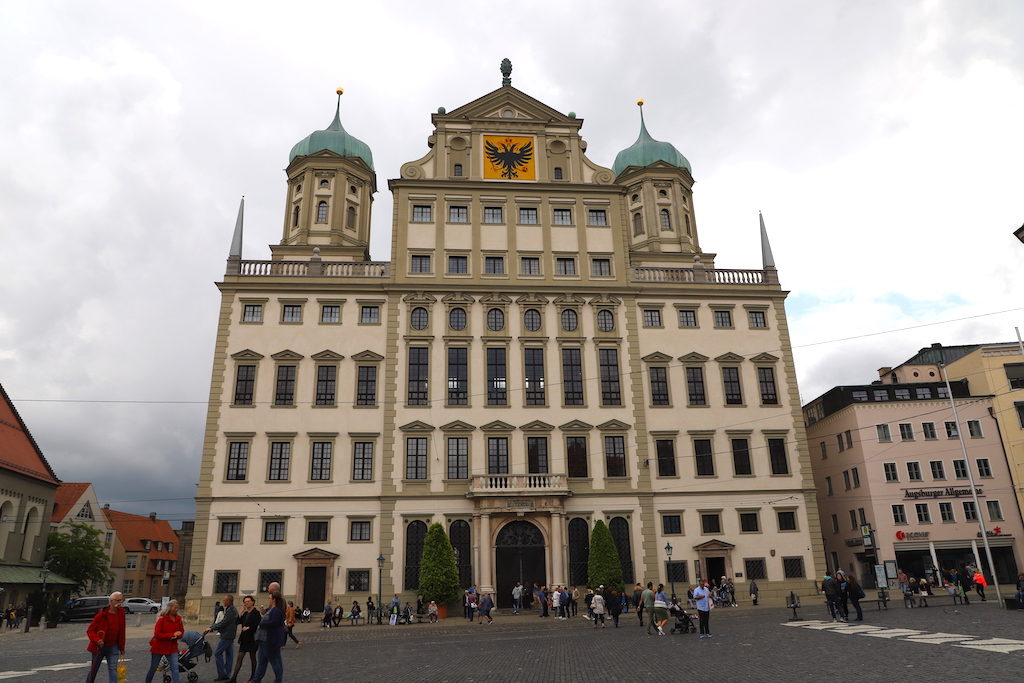 On the second floor of Augsburg Town Hall, you can visit the Golden Hall, named for the gold jewelry that decorates the interior.

The ceiling is covered with 23 ½ karat gold leaf and was once hung with 27 chains on the wooden roof truss. Today, it's attached to a steel stone ceiling.

Like much of Augsburg, the Town Hall was destroyed in 1944 but rebuilt after the war. The outside was restored as best as possible to its original facade between 1980-1984. The inside was restored the following year.

On the ground floor, there are memorials to Holocaust victims and the night of the World War II bombing.

There is a small fee to see the inside of the Augsburg Town Hall. Hours are usually 10 a.m. to 5:30 p.m. Monday through Saturday, but it’s a good idea to check if you plan to go inside.

Though there really isn't much to do in the Weberhaus in downtown Augsburg other than shop on the first floor, the history is fascinating. According to the research I found, the building was erected in 1389.

The building served as the weavers guild until 1548. Weaving was a very popular trade in Augsburg during that time. Between 1605-1607, the mayor, also an artist, painted the building with frescos. 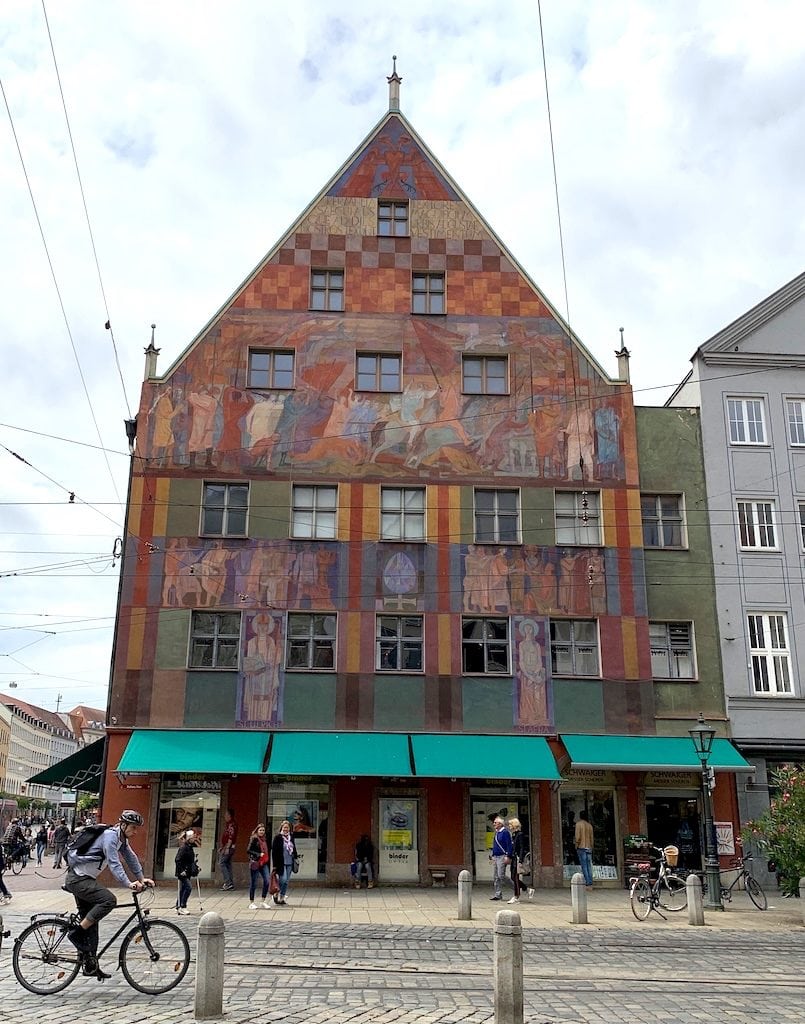 The building was auctioned off in 1863, and the inside was redesigned. Fortunately, the city of Augsburg bought the building back around the beginning of the 20th century.

The Weberhaus was demolished in 1913, rebuilt, and destroyed again in World War II. The building was finally restored between 2007-2008. If you go to the Town Hall or Water Management System, you will see this building, as they are all on the square.

The Augsburg Cathedral is gorgeous.! The city dates all the way back to the Roman military camps. Where the cathedral stands today, there was once a basilica consecrated in the year 822. 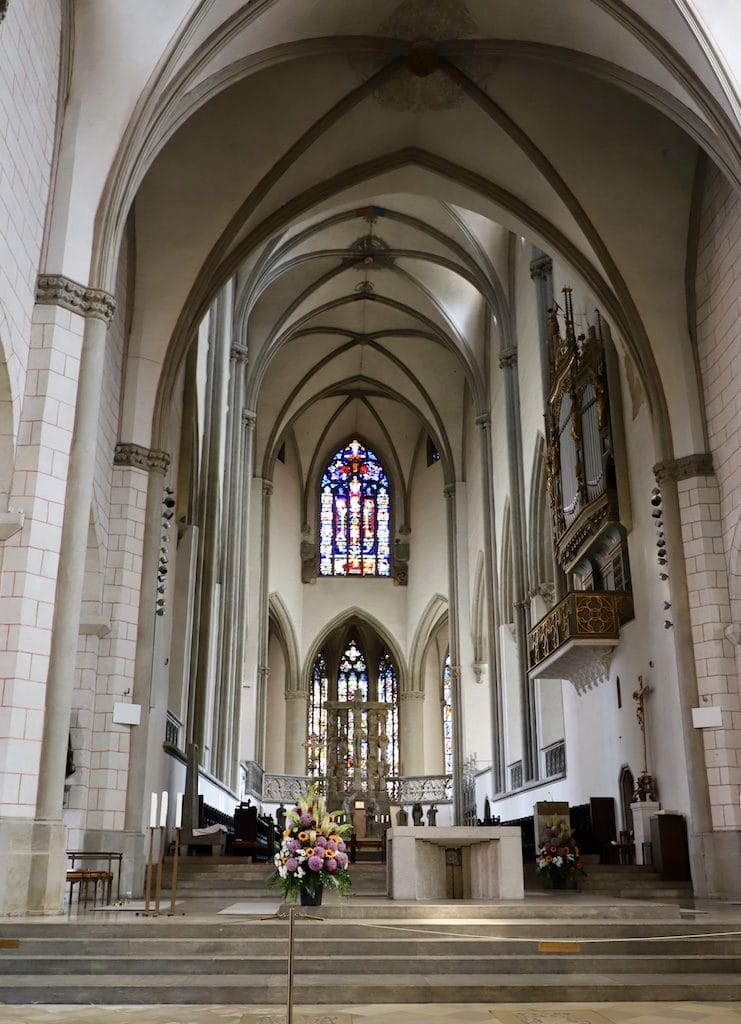 You'll find signs around the cathedral with explanations in English. Make sure to stop in, especially if you're already in the city. Public tours are available. Visit the website to learn more.

For a great view of the city, visit the Perlachturm, one of the tallest buildings in Augsburg. If the yellow flag is flying, you should have a clear view of the alps - as long as you're able to walk up the flight of 261 steps! From the look of the webcam on their website, you'll have quite a reward waiting for you at the top!

Please let me know if you plan to visit. This was my third trip and there is still so much I haven't seen. I'm making a list for when I return! If you do visit this area, try to spend some time in Nördlingen, Germany, too. It was one of our favorite cities in Bavaria.

Can't wait for a taste of Germany? Try one of these traditional German dishes!