After spending one day in Budapest, I can't wait to return. This capital city of Hungary has everything I look for in a destination in Europe. 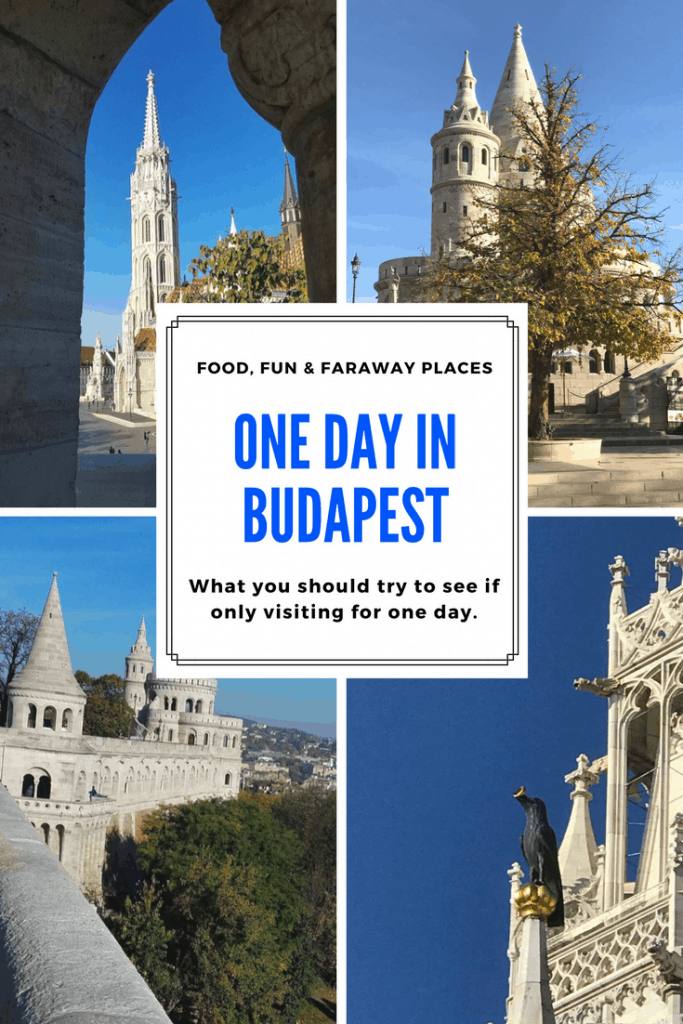 When we booked the Romantic Danube Viking River Cruise from Budapest to Nuremberg, I was so excited about finally spending some time in this quintessential city. Budapest is as breathtaking as all the photos you've seen. 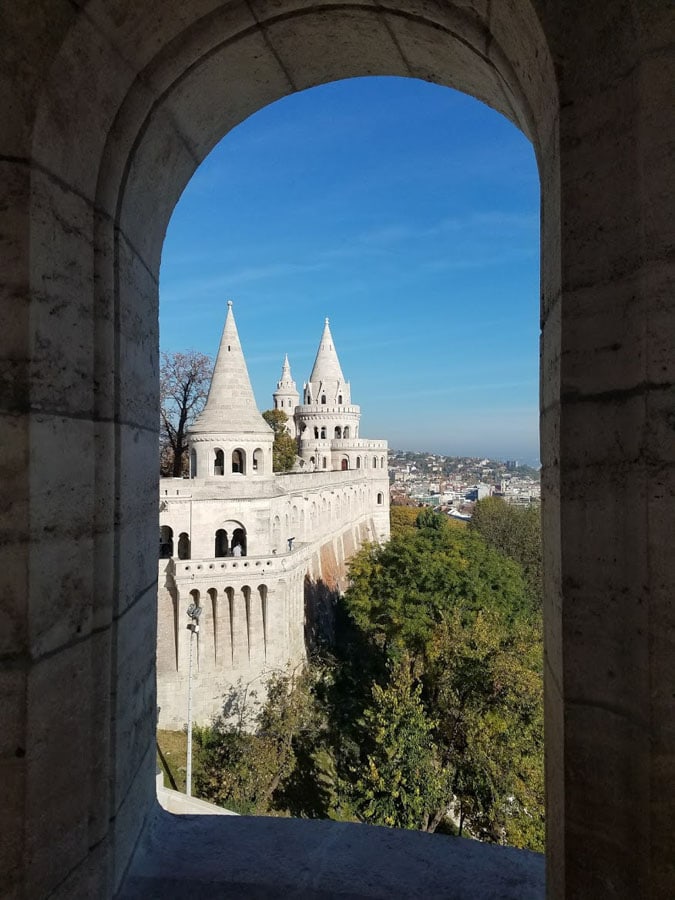 The Hungarian way to pronounce the name of the city is Bood-ah-pescht, and it's hard to believe now that it was almost Pestbuda. An explanation of the two names is fairly simple; there are actually two sides to Budapest. The Danube divides the city, and on one side is Buda (historical, museums) and on the other, Pest (more urban, Parliament, Basilica.)

The history of Budapest is not so simple, and began around the years of 41-54 AD when about 500 cavalry units arrived in what then was known as Aquincum. If you are a history buff, even just a little, spend some time reading about Obuda before you go.

I wish we had been able to spend a month in this part of Europe! As Hungary is bordered by Austria, Slovakia, Romania, Serbia, Croatia, and Slovenia, I would have loved to be able to visit each country.

Maybe if we do this particular Viking River Cruise again, we'll consider more time. For this trip, we would be seeing parts of Germany, Austria, and Hungary. 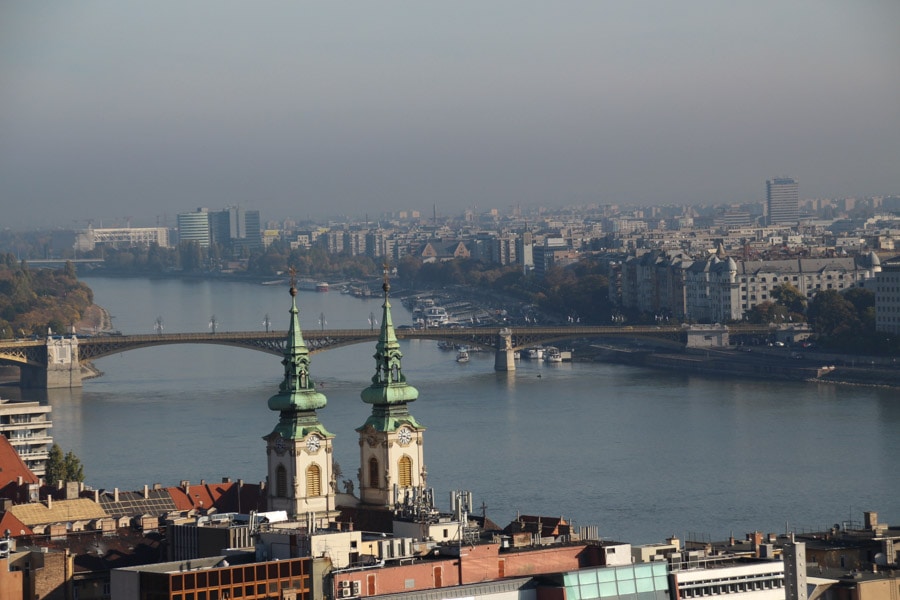 One Day in Budapest

As I mentioned, we only had one day to see Budapest. We had planned to arrive early, but two of our flights were delayed, getting us in just in time to freshen up for dinner.

Thankfully, the Viking Egil was docking in Budapest overnight, so we still had a full day to see the city.

If you do get in early in the day on any of the Viking Cruises, there is usually a Welcome Walk that is included in your cruise. You wouldn't know unless you asked, but it will be listed in your program guide. It's one of the many extras you'll notice after sailing with Viking.

As we were meeting friends onboard, we decided to venture out on our first night. We also wanted to see the famous ruin bars. First stop was a traditional restaurant in Budapest. We were able to walk to the restaurant, which is the beauty of sailing with Viking. You are usually docked right downtown. 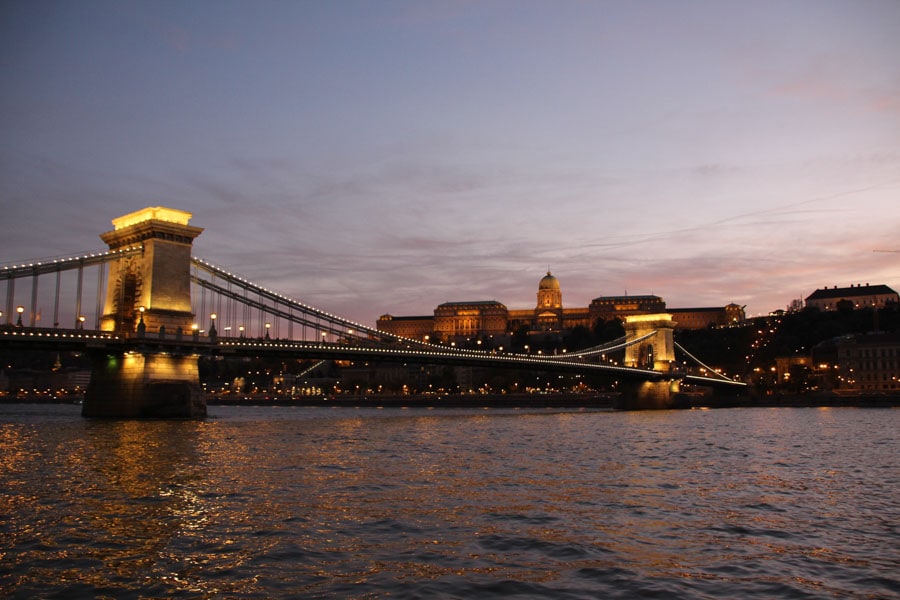 After a fantastic meal, we set out for the ruin bars, on the Pest side of Budapest. It's said that back around 2001, a group of young guys was looking for cheap places to have a drink. Someone had the idea to put up a small bar in an alleyway, others followed suit, and the ruin bars were born.

As many photos as I took, the lighting was just not cooperating. Fortunately, I can always count on my husband for a selfie. This one is with Annette White's (Bucket List Journey) husband, Peter. 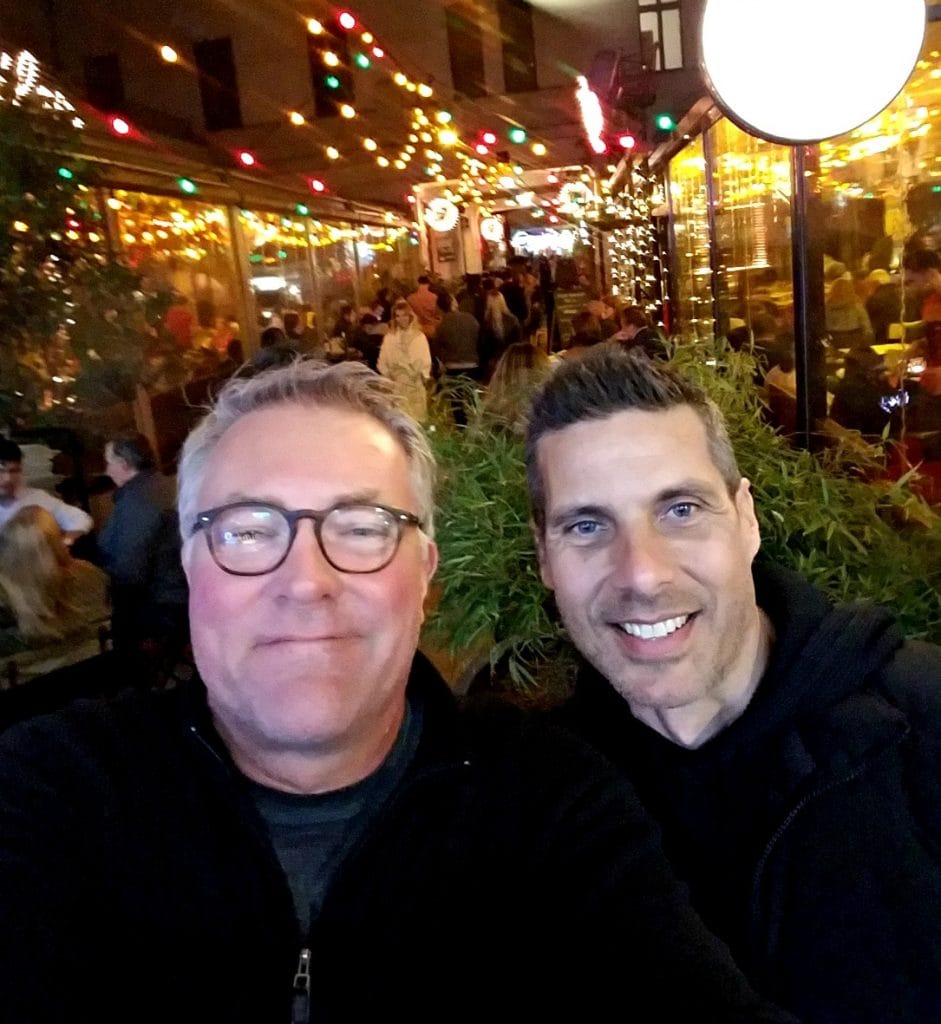 Whether you drink or not, it's cool to see the ruin bars. The decor is artsy, and just taking a walk through is pretty fascinating. And I saw they have Escape Rooms, which is on my bucket list.

I grabbed a beer and just walked around taking photos. Everywhere I turned was another little bar. It was kind of hard to tell sometimes where one ended and the next began. 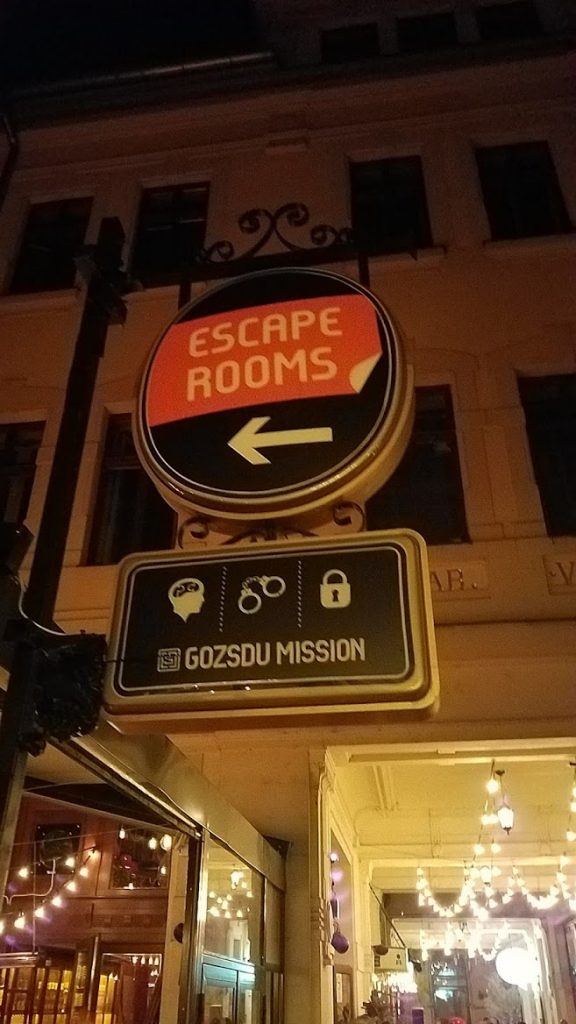 Though I would venture to say it's not for everyone, we all agreed that we were glad we took the time to check out the hip little area. We also knew we had an early excursion, so we didn't stay more than an hour or so. Maybe one more photo of Buda Castle, a UNESCO Heritage Site and Chain Bridge. 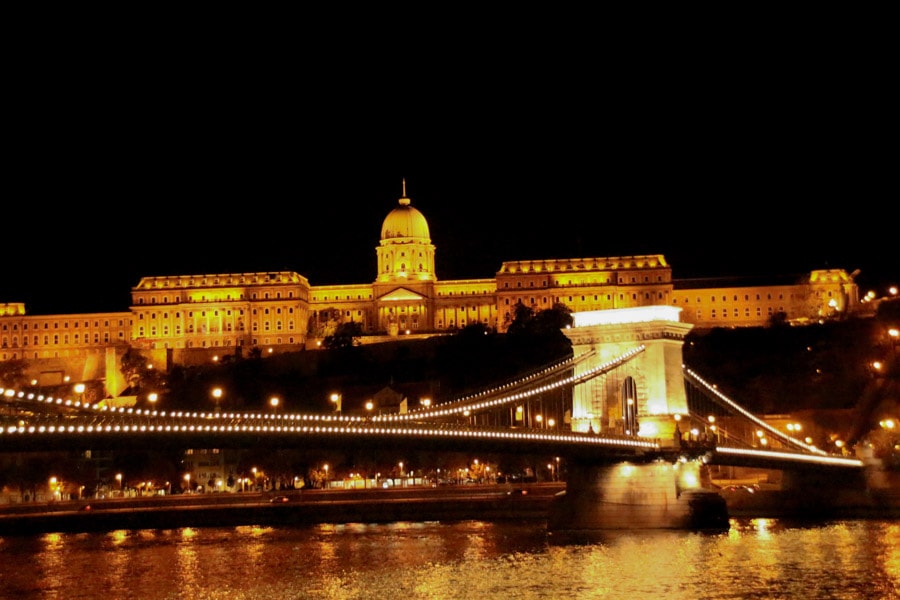 One Day in Budapest Excursion

Heroe's Square is the largest Square in Budapest, also a UNESCO Heritage Site, and one of the most visited spots. It was built in 1896, as a monument to 1,000 anniversary of Hungary.

The statue in the middle is the Millenium Monument, with Archangel Gabriel towering over at 36 meters high in the center and holding St. Stephen's crown. The crown can actually be seen at the Budapest Parliament. Below, you can see statues of the seven Hungarian tribes' chieftains on horses. 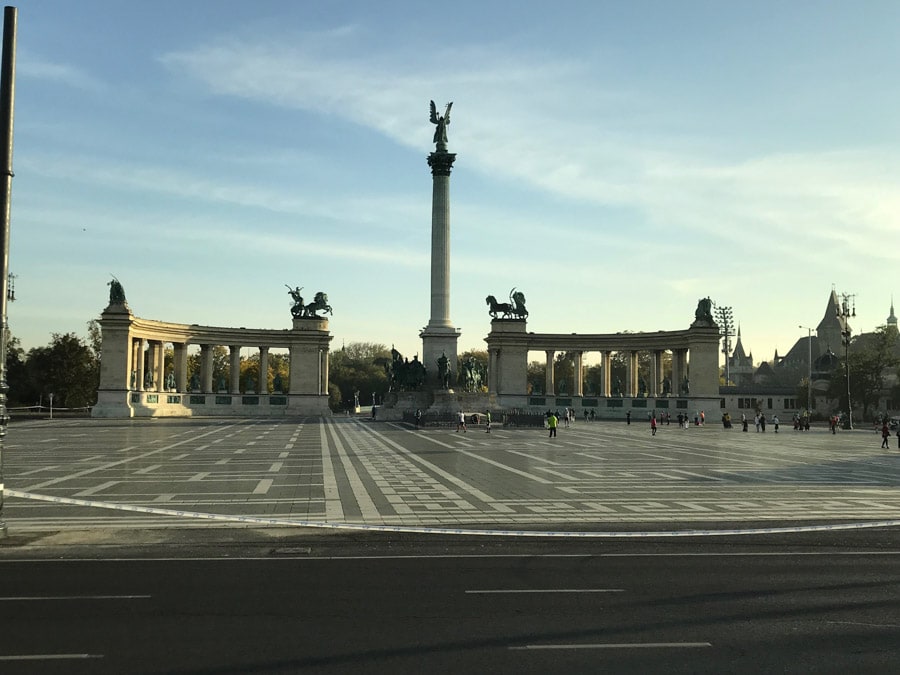 We walked along Fisherman's Hill to Fisherman's Bastian (Halaszbastya), also built to celebrate the thousandth anniversary of Hungary. 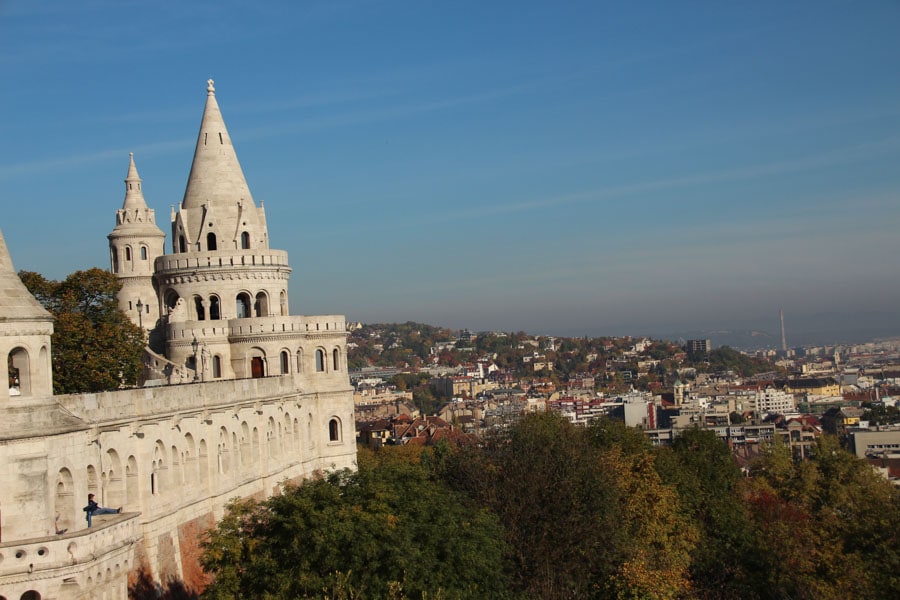 The views are spectacular, and it's a pretty popular place for photos. 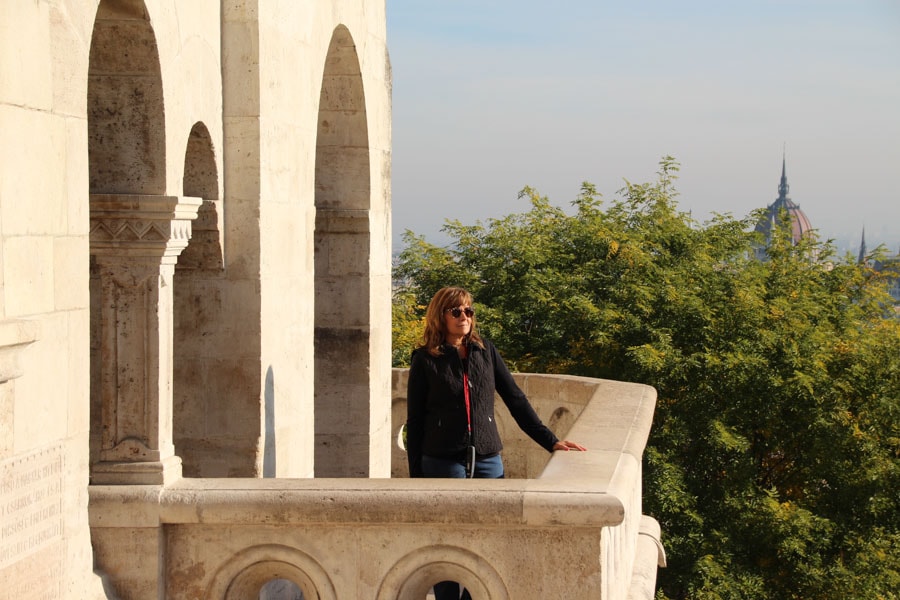 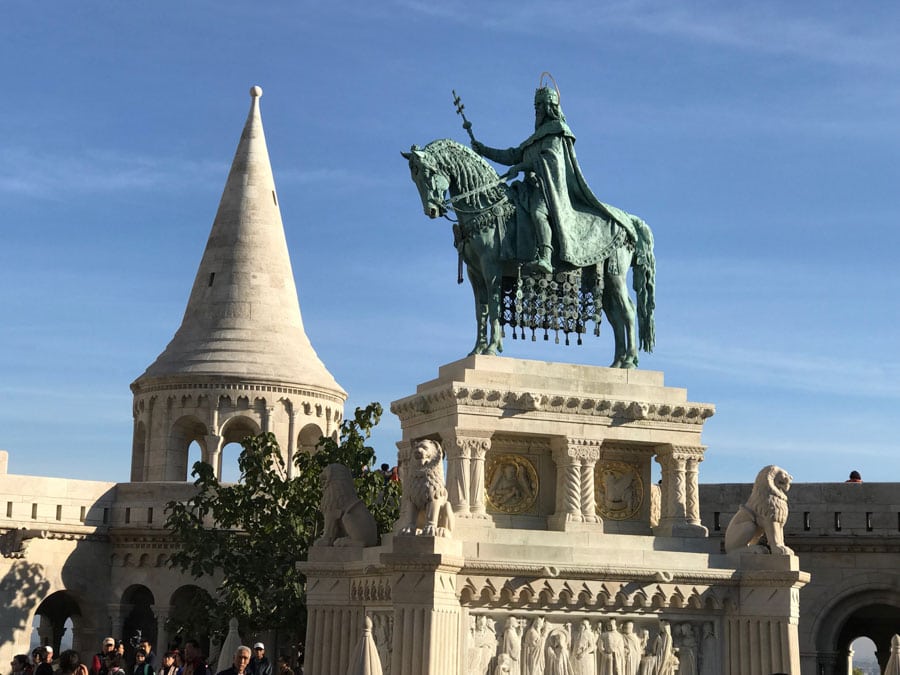 Matthias Church is steps away from Fisherman's Bastian, and truly one of the most beautiful buildings I've ever seen. It's named after King Matthias, king of Hungary from 1458 to 1490. 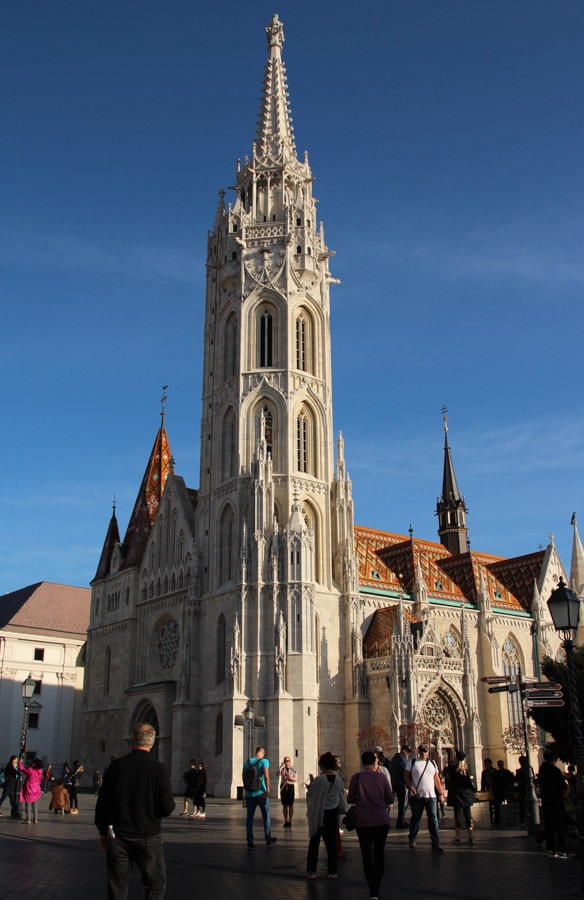 Originally built in 1015, and in the Romanesque architecture style, it is said there are no real archaeological remains of that building. The building that stands now is Gothic style, and built in the 14th century, though massive updates came in the 19th century. 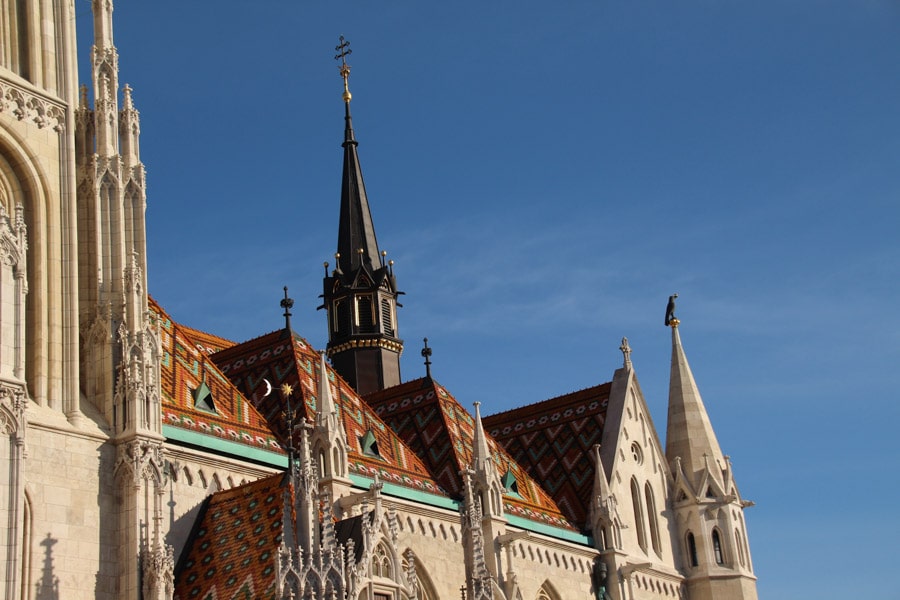 Notice the raven on top of the steeple? The legend says that on the death of the current king, during the 15th century, Matthias' mother sent for him in Prague by sending a raven with a gold ring in its mouth. 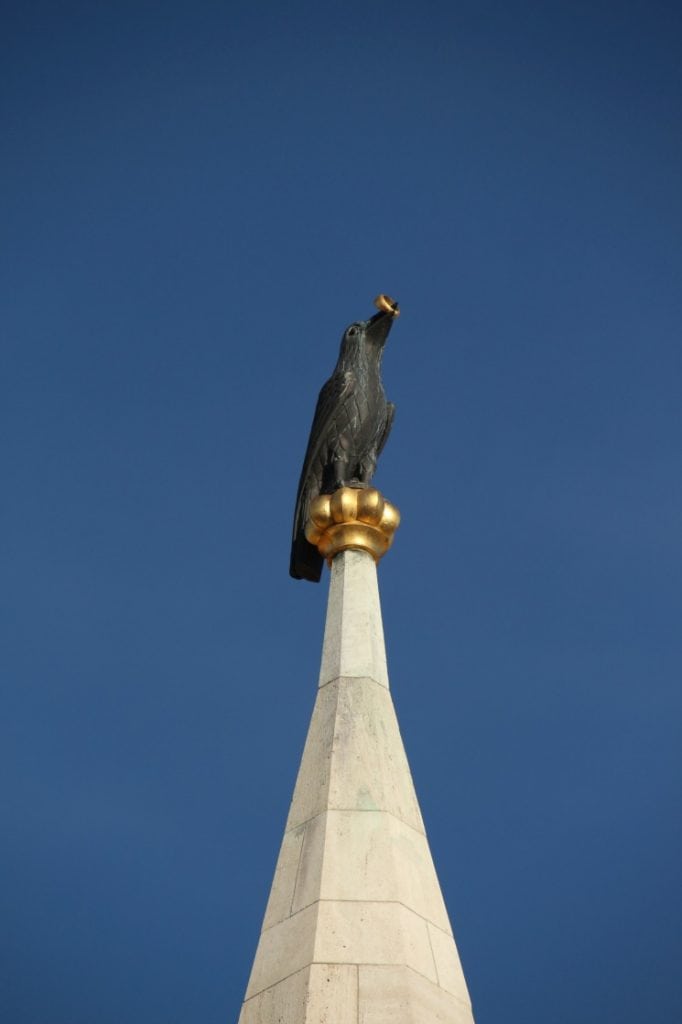 On the Pest side of Budapest, you can see the Parliament, though the view of it is fantastic from the Buda side. 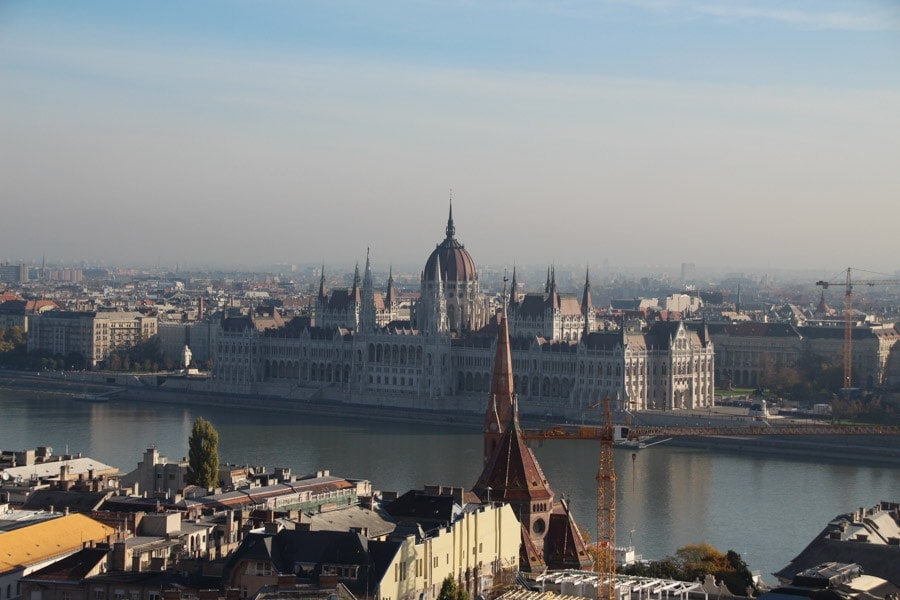 I was glad I got this shot of the Eszter Basilica, too, as we were sailing by. This stunning cathedral is the largest church in Hungary, built between the 10th and 13th century.

Photos I've seen of the other side are just incredible. Maybe next time. One day is definitely not enough. 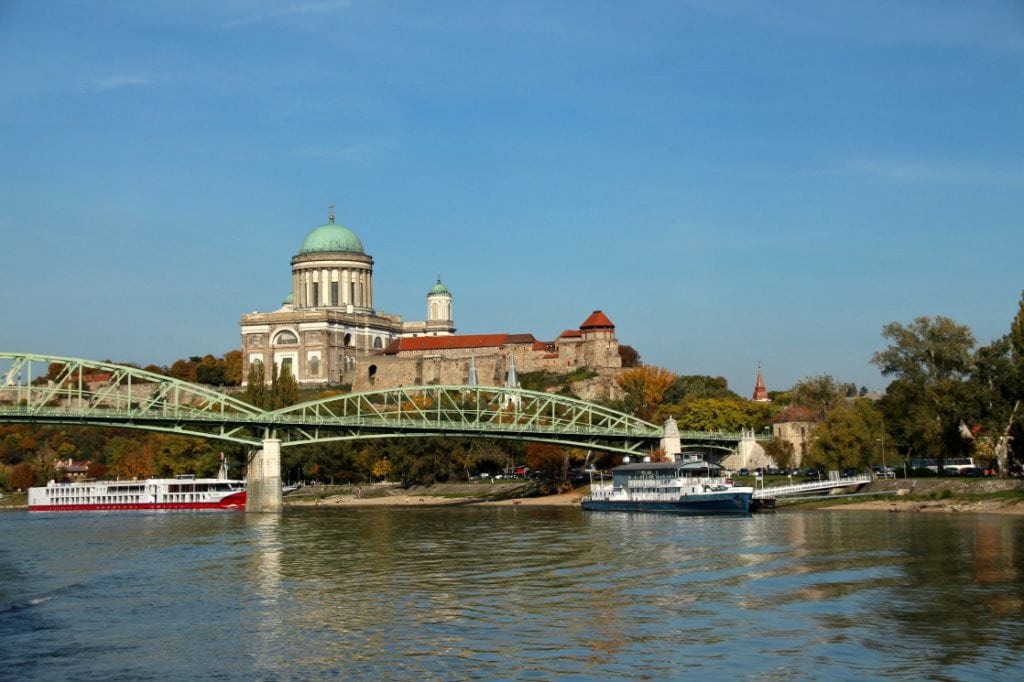 All that walking makes you hungry, and there is no shortage of cafes and shops to stop for a pastry in Budapest. And you should. Hungarian pastries are swoon-worthy (and Instagram perfect!) 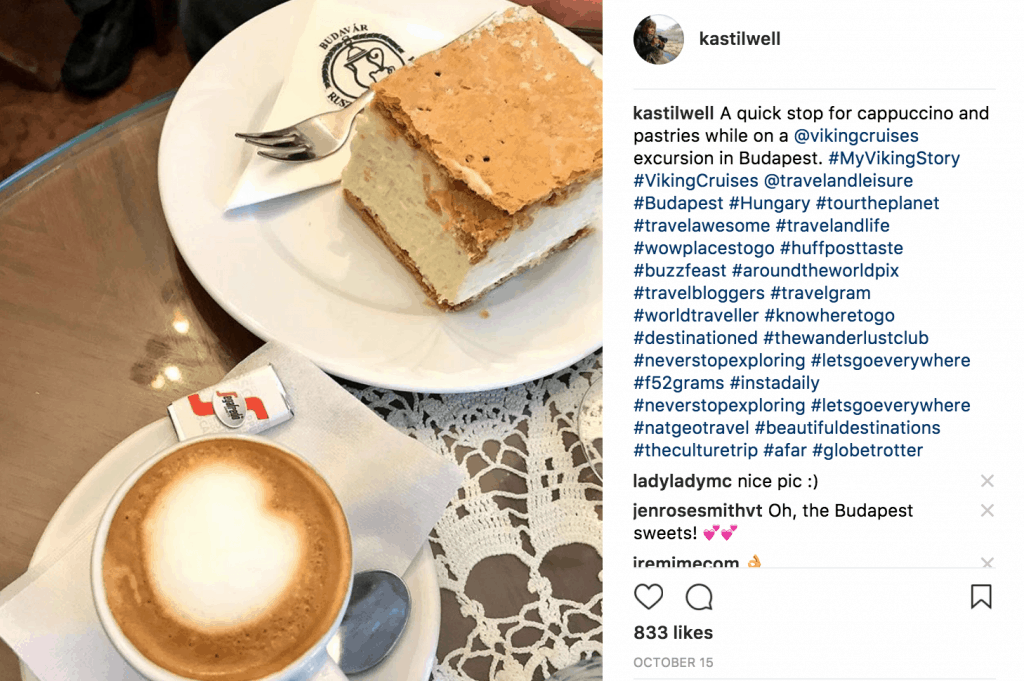 As we wandered around after the Viking excursion, we ended up at Buvadar Ruszwurm Confectionery, one of the oldest pastry shops in Budapest. And when I say old, I mean old like 1827. Our definition of old in the United States is not quite the same as it is in Europe! 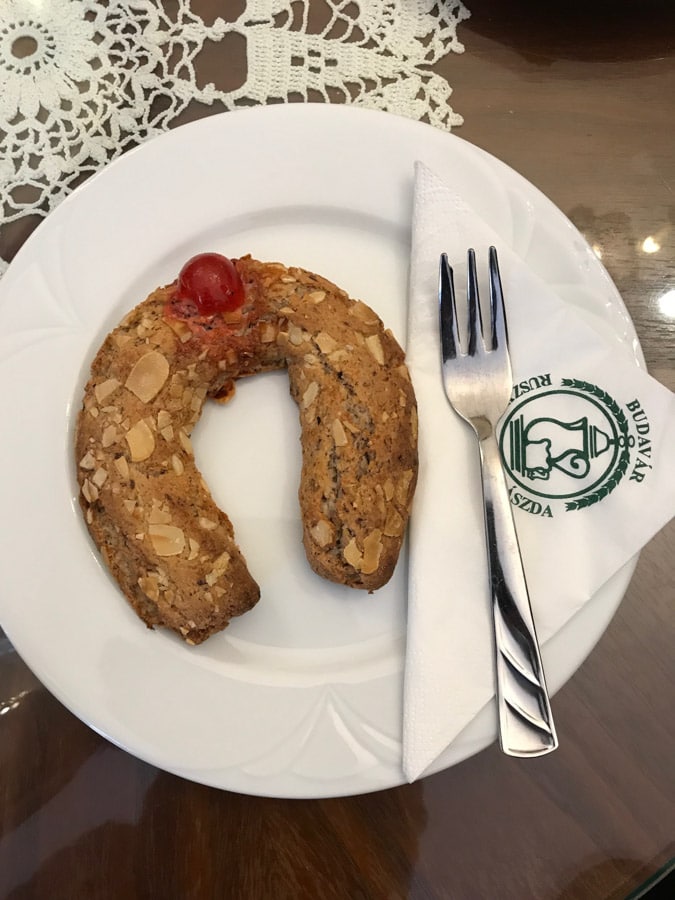 With shelf after shelf of pastries, it was hard to choose one. I suggest you order at least one per person and share! 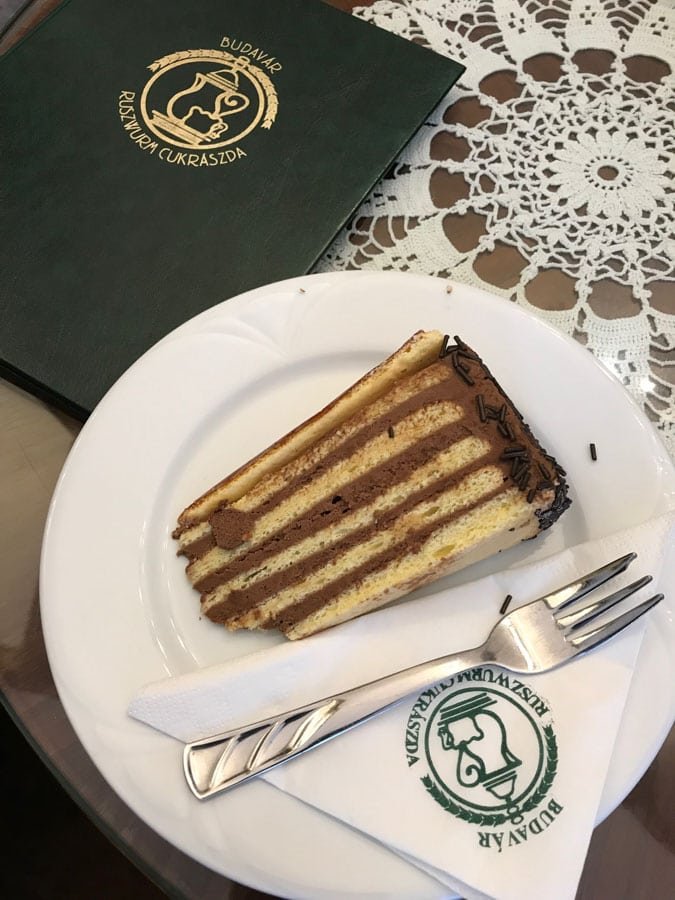 After our morning excursion, the Viking bus picked us up and took us to Visegrad where we met the ship before it headed to Vienna.

Onboard the Viking Egil

The rest of our afternoon was spent enjoying the gorgeous fall foliage. 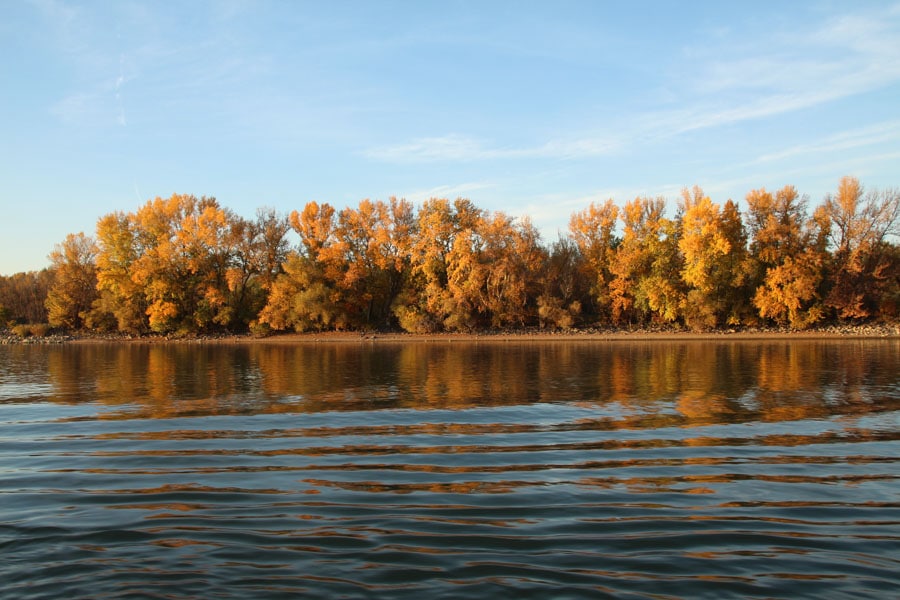 With a snack. Because snacks and bubbly are important when you're on vacation! 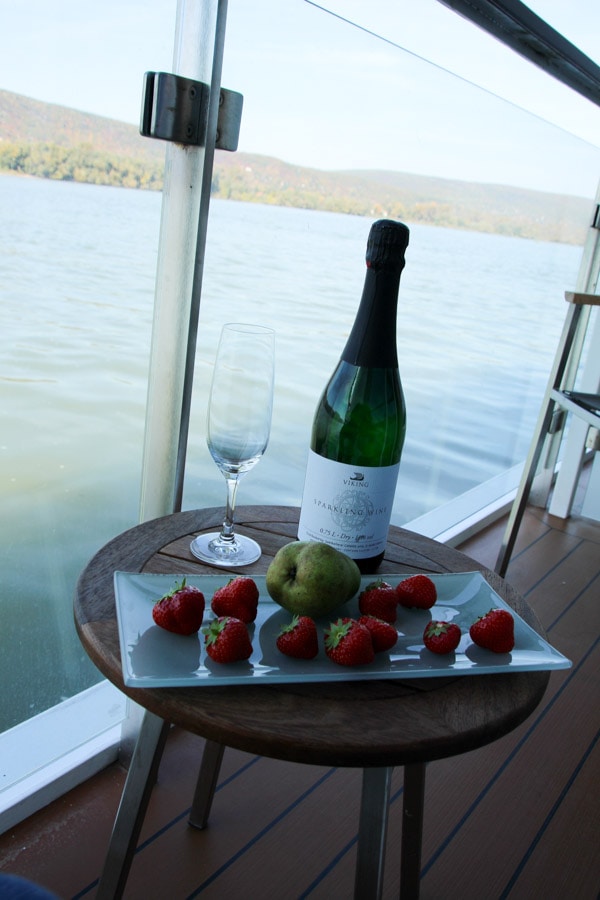 It's pretty relaxing to hang out on your balcony, which I definitely suggest. 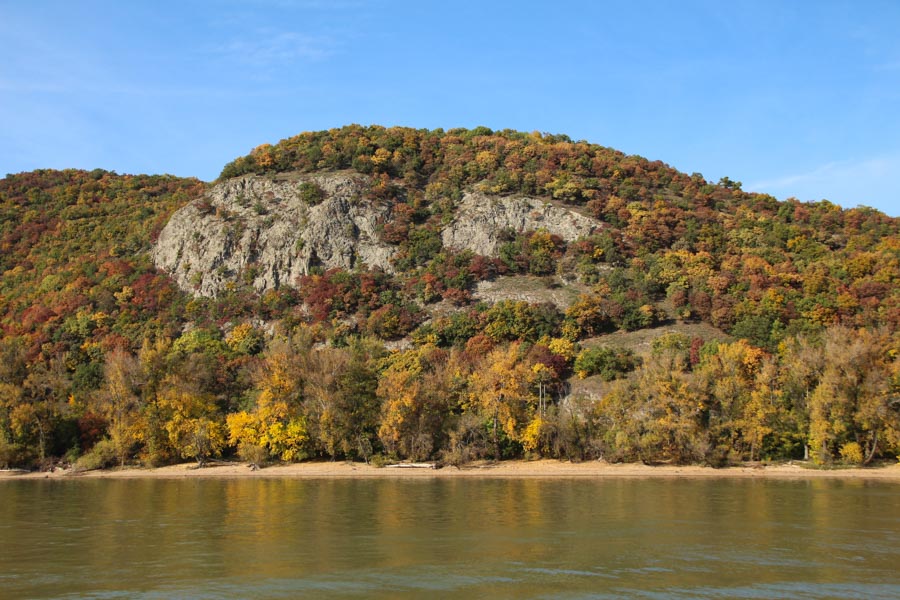 An afternoon Hungarian Teatime was offered, as well as a presentation about Austrian Coffee Houses and Mozart. Before we knew it, cocktails were being served for the daily Cocktail Hour in the lounge, and the official Welcome Dinner was served.

This salad was one of my favorite dishes of the evening. Those rounds of deliciousness are lightly fried goat cheese. 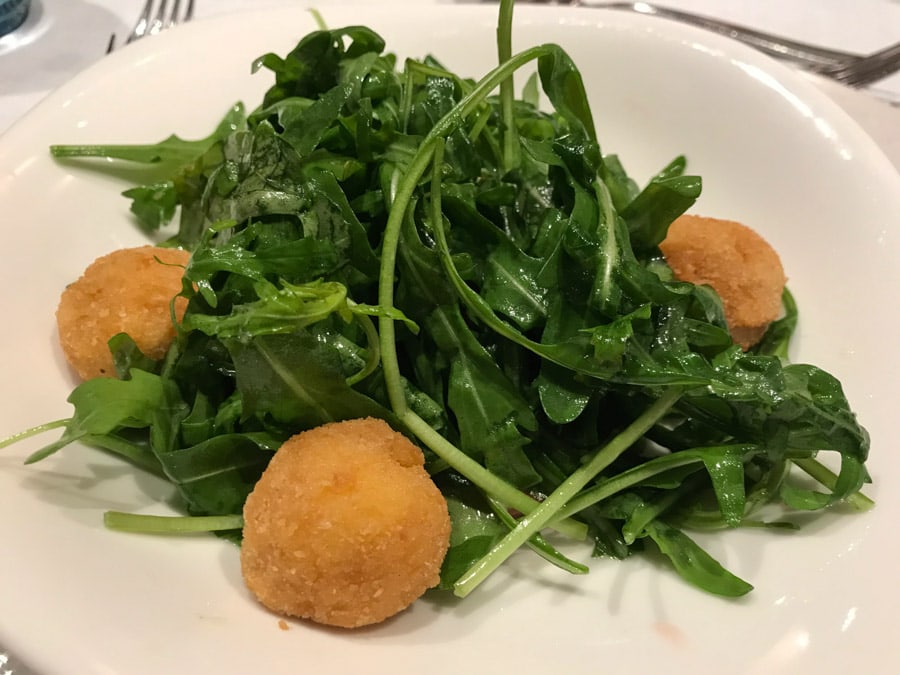 And though you can always say no to dessert, you really don't want to. 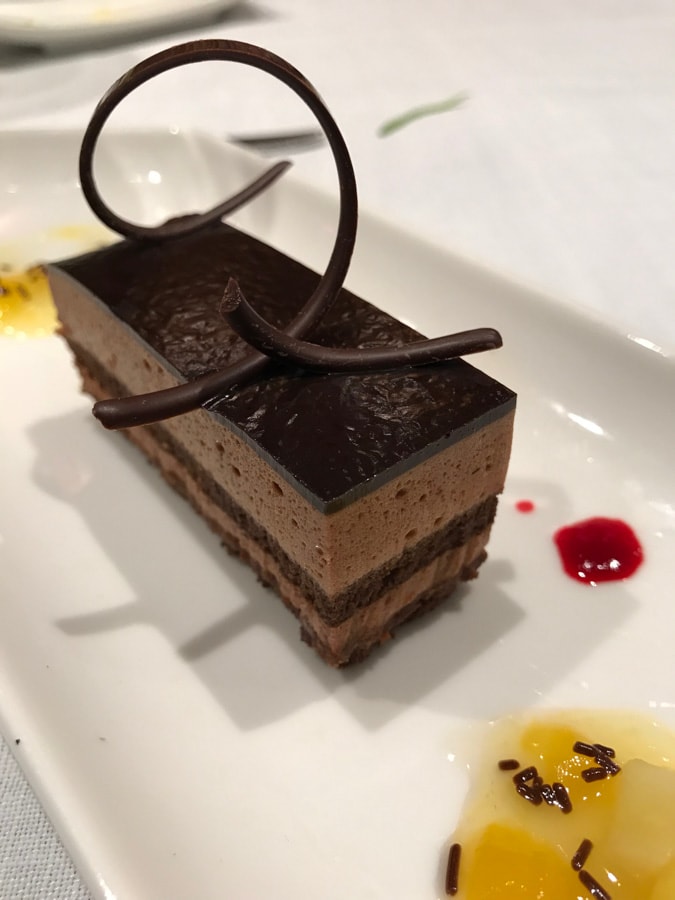 If you're wondering about nightlife on Viking, there is always something offered. On this night, a short lesson in the German language was offered and there was live after-dinner music in the lounge.

As for my husband and me, we were exhausted by the time we finished our dessert and decaf. That comfortable bed in our stateroom was waiting and we couldn't wait to see Vienna, Austria.

Thinking about a Viking Cruise? Check out some other articles I've written:

12 Reasons to Go on a Viking River Cruise with Family

A Taste of Provence

My Top 3 Excursions of the Lyon to Provence River Cruise

One Day in Basel Switzerland

Many thanks to Viking River Cruises for hosting me on this trip.