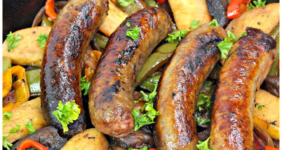 Get ready for a flavor explosion with this bratwurst skillet recipe. Roasting these bratwurst sausages together with the apples and peppers melds the great flavors into a pan of pure deliciousness.

A few months ago I spent some time traveling along the Romantic Road in Germany. I miss the traditional German food already! Try this cheddar ale and bratwurst soup and you'll see what I mean.

My first time in Germany was with Viking Cruises, where they always showcase the food of the region. That was an incredible trip. If you haven't sailed with them, check out whey you should consider a river cruise with your family. They go to several different regions of Germany.

I remember when I first told people I was going to Germany. Knowing I'm a foodie, they said not to get too excited about the food.

Turns out they were wrong about this wonderful country not having great cuisine! But I get it - many people think German food is not all that special.

Growing up, the only German food I was introduced to was sauerkraut. I thought it was disgusting when presented as a topping for hot dogs.

I did try it when I was a kid and again as an adult. What was I missing? Now I know.

We, for the most part, don't know how to prepare sauerkraut, bratwurst recipes, or other German dishes here in the states. I had so much wonderful food in Germany, and can't wait to go back and try more.

What You Need to Make this Recipe

Depending on your grocery store, you may see several kinds of brats. There are actually many different varieties of German sausage options from Fränkische bratwurst to Nürnberger Rostbratwurst, and they all have their own unique flavor.

If you live in the Wisconsin area, you've got Sheboygan bratwurst, which is the most famous bratwurst. Back in the 1900s, German immigrants set up their shops on the banks of Lake Michigan. I didn't realize the largest ancestry group in Michigan was German!

I find that Johnsonville Beer Brat is a good quality brand of bratwurst and one we can find in just about any store. You can also make your own beer brats by soaking them in your favorite beer broth for 6-12 hours or up to 24 hours. It really does give them extra flavor.

We used red onion, green peppers, red peppers, and mushrooms, but you can certainly switch things up if you don't like mushrooms or prefer white onions. The apple gives a nice sweetness to this dish, but if you don't like fruit with your brats, again, you do you!

How to Make this Skillet Recipe

Cut up the vegetables and apples.

Heat the cast-iron skillet with 1 tablespoon of olive oil on medium-high heat or on a hot grill. (This skillet set is amazing and so inexpensive! If you've wanted to pick up a cast-iron skillet, grab this while they still have inventory!)

Add the uncooked brats to the frying pan and cook for about 6 minutes, occasionally turning them over until brown, bringing out the natural flavors.

When cooked remove the brats from the skillet and set aside.

Add the rest of the olive oil into the cast iron skillet heated on medium-high.

Cook the sliced onions for about 1 minute.

Add the peppers, cooking for about 3 minutes, continuing to stir as each ingredient is added. They should appear slightly soft.

Add the mushrooms and garlic, cooking for 1 minute.

In a separate skillet saute the apples.

When the apples are done add them to the cast iron skillet.

Add the brats and broth to the cast iron skillet and stir to combine.

Transfer the cast iron skillet to the preheated oven set at 350º for about 20 minutes in the center position. (Check to make sure that the sausage is completely cooked by checking the internal temperature with a meat thermometer. It should be 160º.)

I'd have a lovely cold beer from Germany with this meal!

This is pure comfort food any day of the week!

Another one of my favorite sausage recipes is these stuffed mushrooms. It's super easy and has 3 ingredients including the mushrooms!

We often have these and another appetizer or two instead of a main dish for dinner. It's so much easier when you need a break!

If you're thinking about visiting Germany, I have to recommend a few places that we loved.  Check out the links below and let me know when you're going! We had the best experience in Germany!

Places to Visit in Germany

Have you been to Germany? I'd love to read about where you went. There is still so much I haven't seen. Let me know in the comments below. 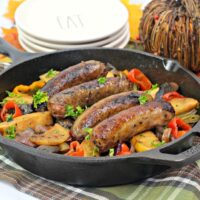 This delicious bratwurst skillet is so easy to make. Add this to your list of simple recipes for any night of the week.
5 from 1 vote
Print this Recipe Pin this Recipe Rate
Course: Dinner
Cuisine: German'
Prep Time: 15 minutes
Cook Time: 25 minutes
Servings: 6 people
Calories: 320.85kcal
Author: Kelly Stilwell