Take Guinness Irish Beer Ribs to a party and you'll be the hit of the evening. I am convinced that there is not much that doesn't improve when paired with this Guinness Sauce.

Seriously, I've even eaten the sauce as a bread dip mixed with a little olive oil and it's fabulous. I think it would even be good on cardboard! (You do know I'm joking there, right?!)

I had been searching for a recipe for the ribs they make at Raglan Road in Downtown Disney, but never found anything. Then it occurred to me to try the Guinness sauce on them. Good move.

These Guinness Irish Beer ribs are the best ribs I've ever tasted, by far. I really wasn't a big fan of ribs before I tasted them at Raglan Road. The Guinness Irish beer makes all the difference.

I've only tried to make ribs once before. The recipe said to cook them for an hour. I thought something was wrong with that idea, but went ahead and gave it a try. It was mediocre at best. I should have let them cook longer. A lot longer!

The following recipe cooked for three and a half hours. Longer cooking time, this Guinness sauce, and getting them slightly crisp at the end - that's what makes the magic happen!

For more delicious appetizers, check out this list of easy cream cheese appetizers and these easy party appetizers.

What You Need to Make Guinness Irish Beer Ribs

To make these ribs, you'll need bone-in pork spare ribs, fajita seasoning, brown sugar, and Guinness sauce. This Raglan Irish Stout glaze recipe is used at Raglan Road in Disney Spring. I bought it there for years until I was told how easy it is to make it. It's crazy delicious!

Place the ribs on two separate pieces of heavy aluminum foil, shiny side out.

Sprinkle fajita seasoning and brown sugar evenly over ribs, rubbing it in.

Cover each rack of ribs with another piece of foil, shiny side out again, folding foil on 3 sides so that it seals in the ribs.

Pour a half-cup Guinness sauce evenly over each rack.

Seal the other side of the foil.

Pour off the drippings from the foil packet.

Boil in the saucepan until reduced by half.

Brush on reduced juices and sauce and broil until ribs are slightly crispy.

I served the ribs with sweet potato fries and it was the perfect side dish.. Enjoy. Refrigerate leftovers. Great the next day, too!

Other Recipes with Guinness Irish Beer

These Guinness Cupcakes are delicious and so much unexpected fun. I love to bring them to parties! For an amazing dinner, try this Guinness beer-braised short ribs recipe! This recipe is right from the Guinness Storehouse!

If you make it to Ireland (and you should!) be sure to visit the Guinness Draught Storehouse in Dublin! You can actually get your face etched into the foam on top of your beer! 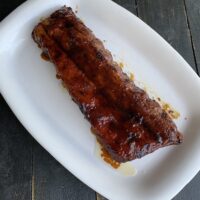