My favorite food has always been appetizers. I was just in New York City with my family and instead of eating huge dinners (especially late at night) we just ordered appetizers to share. We even took the leftovers back to our room to munch on the next day.

The other beautiful thing about appetizers is that they are usually pretty easy to prepare. Take these holiday crostini to a party and your friends will think you are a total rock star! We'll keep it between us that is was so easy to make!

What You Need to Make It

This recipe is so easy. You'll only need five ingredients plus olive oil, balsamic vinegar, and salt and pepper.

How to Make It

Lay out grape tomatoes in a single layer in a glass baking dish.

Drizzle with olive oil and sprinkle with salt and pepper.

Bake for 20 minutes. The tomatoes will pop and sizzle.

Remove from oven and drizzle with balsamic vinegar. Set aside and let cool.

Once the tomatoes are cool, lightly smash with a fork so they split open. Reserve oil and vinegar.

Toast the baguette slices in the oven until golden, about 8-10 minutes

Spread each baguette slice with goat cheese and top with 2 tomatoes and a piece of Prosciutto.

Toss the arugula in the oil and vinegar leftover from the tomatoes. Place a few leaves of arugula on top of each crostini.

A wonderful wine pairing would be a Cabernet Sauvignon.

This recipe was provided by Jacqui McGovern from Your Best Friend's Kitchen. 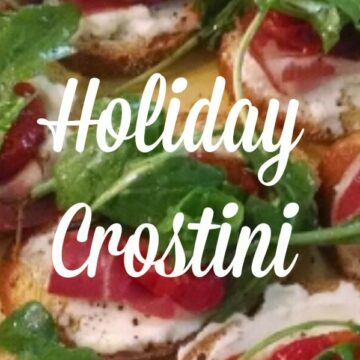