I've been thinking about making this Sacher Torte recipe ever since visiting Vienna with Viking Cruises a few years ago. If you've never been to Austria, a cruise along the Danube is a wonderful introduction and will give you the opportunity to try this and other Viennese cake recipes.

If you're interested in tasting food from around the world, Viking Cruises has a myriad of cruise choices, offering food-themed excursions off the ship, as well. Eating is my favorite part of travel!

See how easy this is to make!

Just so you know, I did look up Sacher Torte pronunciation, and the first three were all different!

You'll also see there are also two variations; the two-word variation I've used as well as Sachertorte, all one word. I do believe you will be safe ordering zak-er-tort, but I'll have to ask the next time I'm in Vienna! If you do visit, drop by the Café Sacher Wien for a slice of this famous Sacher-Torte.

This dessert is so decadent, I can promise your friends and family will want the recipe. If you like apple pie, you'll also want to try this recipe for apple tarte tatin, also from Viking Cruises!

This chocolate torte may look gourmet (and the flavor definitely is!) but you only need seven ingredients to make it! It's is best topped with a large dollop of fresh whipped cream.

How to Make Sacher Torte

Grease and line a 9-inch cake tin. (You can also grease it and sprinkle with flour).

Cream together the butter and sugar.

Mix in the egg yolks until the mixture is very creamy.

Melt the chocolate in a heatproof bowl placed over a saucepan of simmering water. Do not allow the bowl to touch the water.

Once melted, gradually add the chocolate into the creamed mixture.

Fold into the flour.

In a separate bowl, beat the egg whites until they form soft peaks then gradually fold in the sugar.

Combine this mixture with the chocolate mixture. Pour the cake mixture into the prepared tin.

Bake for about 50 minutes to an hour until springy to the touch. Remove from the pan and cool on a wire rack.

Heat the apricot jam and smooth over the entire torte, including the sides.

For the glaze, melt the chocolate and butter together until smooth and glossy. Pour the glaze over the cake until it’s completely covered.

Allow the torte to cool before serving.

What Other Flavors Could I Use for Sacher Torte?

You could totally use any flavor of jam for this chocolate torte, but it would no longer be a Sacher Torte as the original recipe by Franz Sacher always has apricot jam.

As Sacher created this masterpiece way back in 1832, you might say to leave Sacher Torte history alone and stick with the apricot jam! It also seems we Americans love this dessert, too, as there's an actual Sacher Torte Day on December 5th.

That being said, I so want to try this with raspberry jam. Or even fresh raspberries! Strawberries would be delicious, too. I've had chocolate covered blueberries, so that might be a nice combination, as well.

How Long Does this Chocolate Torte Last?

If you're taking this to a party, it will probably be the first thing gone, so you won't need to worry about leftovers!

If you're making it for your family, you can cover it on a cake stand or with wrap out of the refrigerator for five or six days.

According to the Sacher Hotel where the cake originated, it's best not to refrigerate the torte, but if the temperature is very warm where you are, you certainly can. The flavor of Sacher Torte Vienna is best if you allow it to come to room temperature before serving.

You can also wrap the sacher torte tightly with plastic wrap and freeze it for up to three months, but the flavor won't be as good.

If you have that much left over, why not take a couple of pieces to a neighbor? I would love it if someone brought me a treat like that! 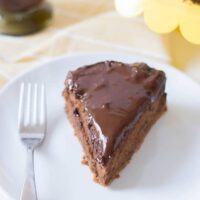