Interviewing James Gunn from Guardians of the Galaxy Vol 2 was incredible.  What I learned about him from the people he directs was that they all love him, they all think he's brilliant, and they are all grateful to be working with him on this film. 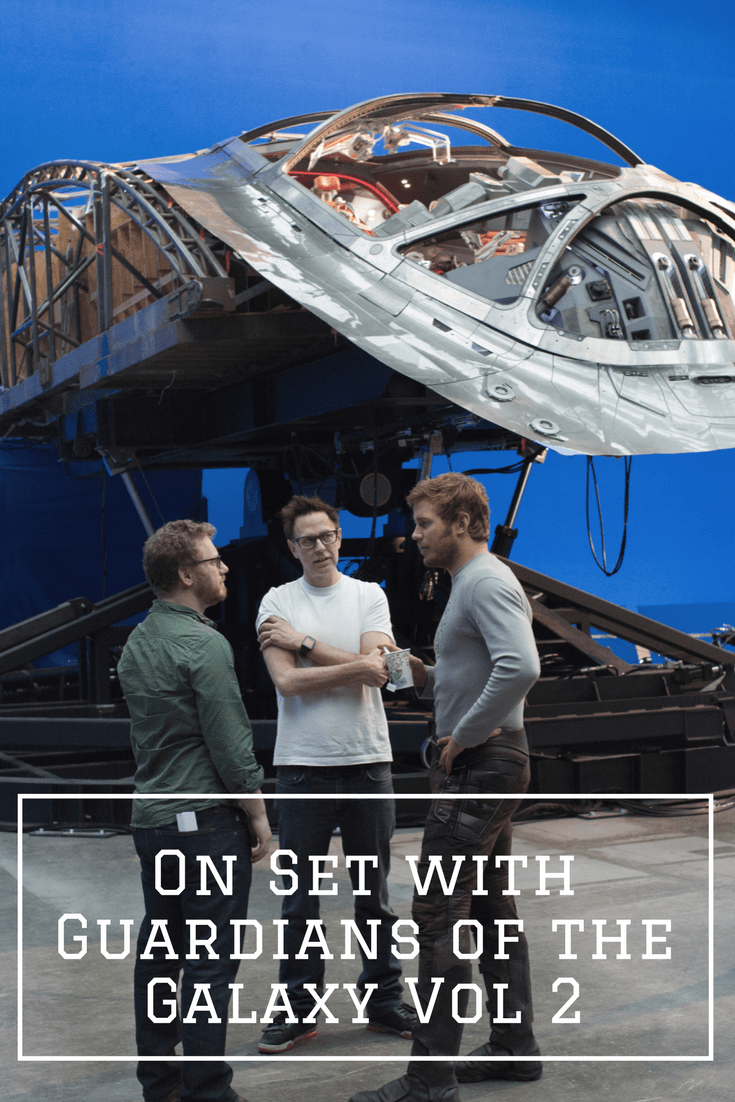 Being on set watching James Gunn direct the film was the experience of a lifetime! 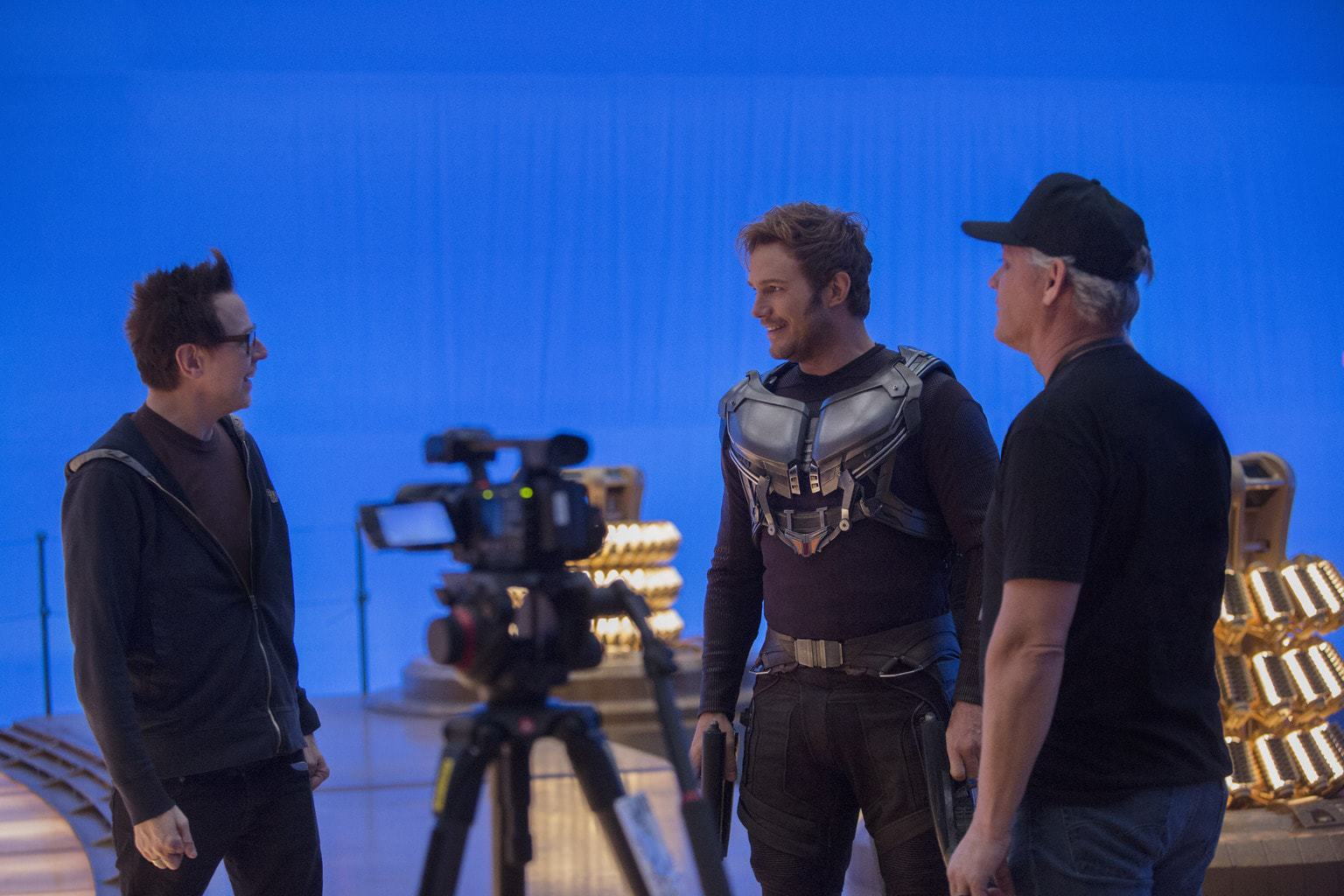 At the age of 12, Gunn was making 8 mm zombie films with his brothers. He studied prose and is a musician, which may be why we have the amazing soundtrack from the first Guardians film and will undoubtedly have for Guardians of the Galaxy Vol 2.

Gunn has directed and co-directed a plethora of films and been a writer on many others. He won five awards for the first Guardians, including the Hollywood Film Award's Blockbuster of the Year and Critic's Choice Best Action Film of the Year.

Gunn is creative, to say the least. 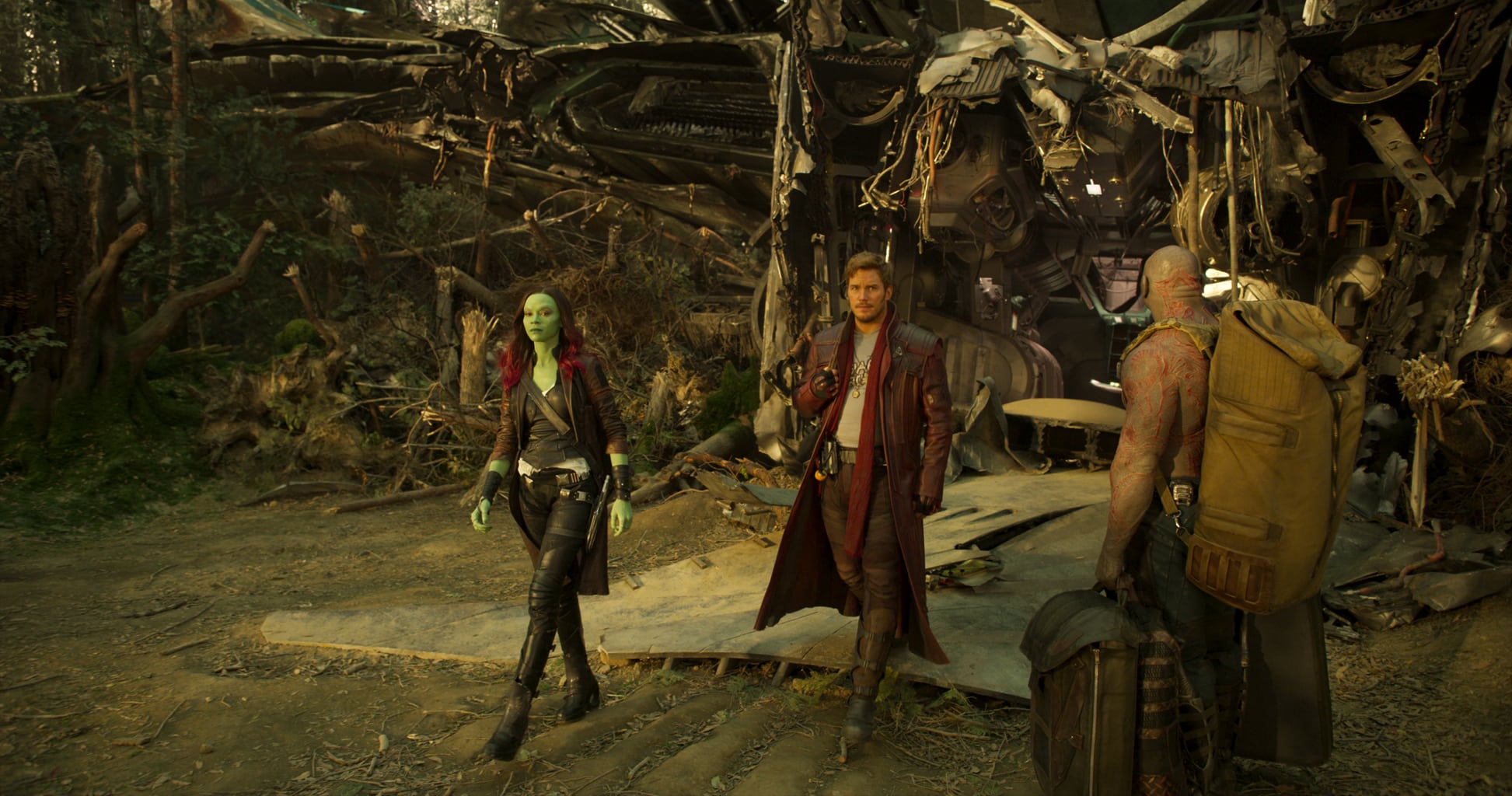 Q: We wanted to know how he came up with the sequel idea.

James:  You know, a lot of the sequel ideas were about Quill’s relationship to his two fathers, basically Yondu and Kurt - the character Kurt Russell plays. 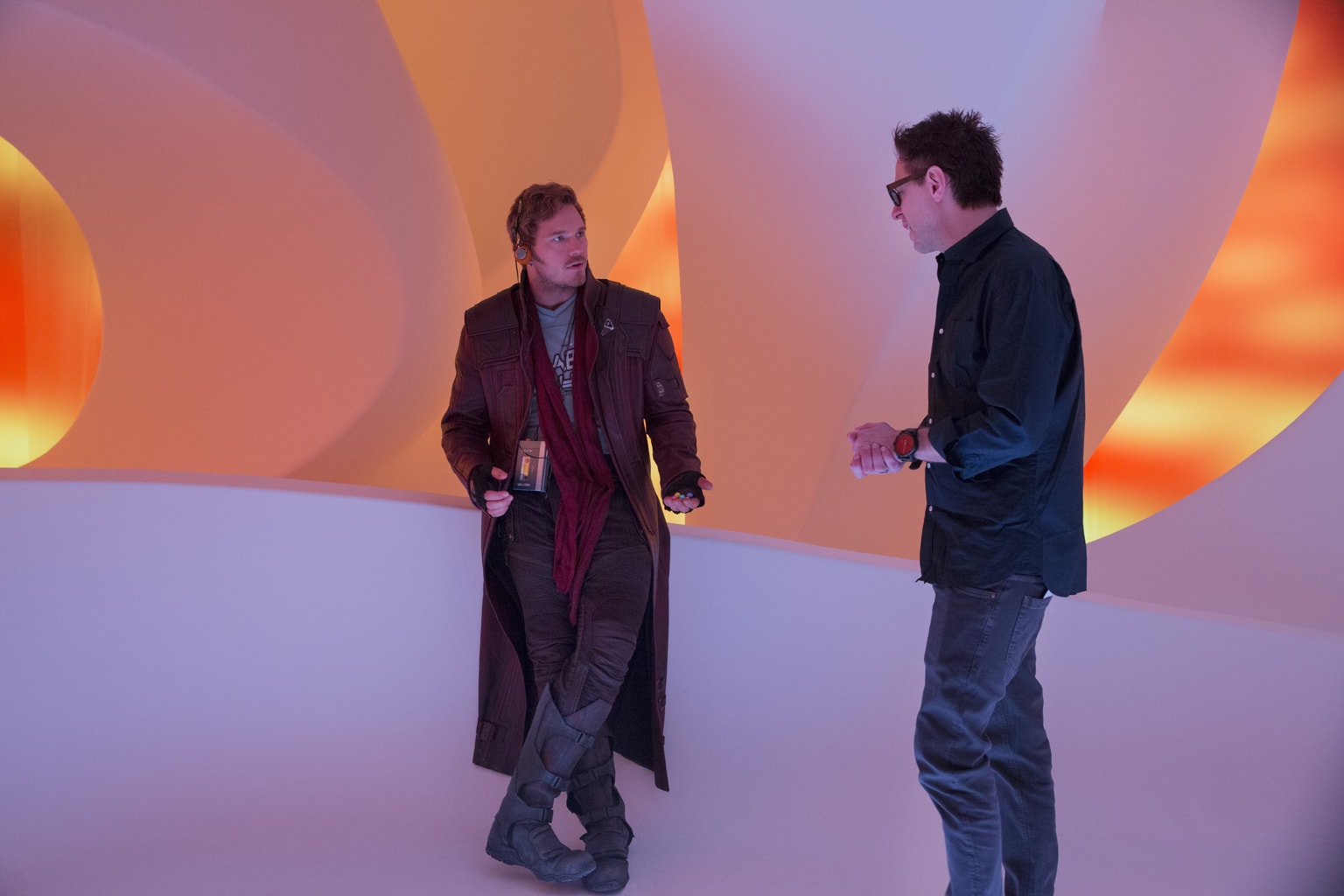 And then the story started to ferment during the first movie. I was always taking notes and thinking about it.

And then when it came time to actually write the screenplay, I’m like, let’s just go for broke and do that story that I had in my head, which was this one. I really started actually physically writing it on the day the first movie came out.

So it was like I was at a loss for what I’m gonna do; sit around and wait to see how much money we make or whatever.

I've got to do something to distract myself and I found the healthiest thing to do was just to get back in the part of the process that I had some control over, which was processing my own work as opposed to being concerned with what the results were. 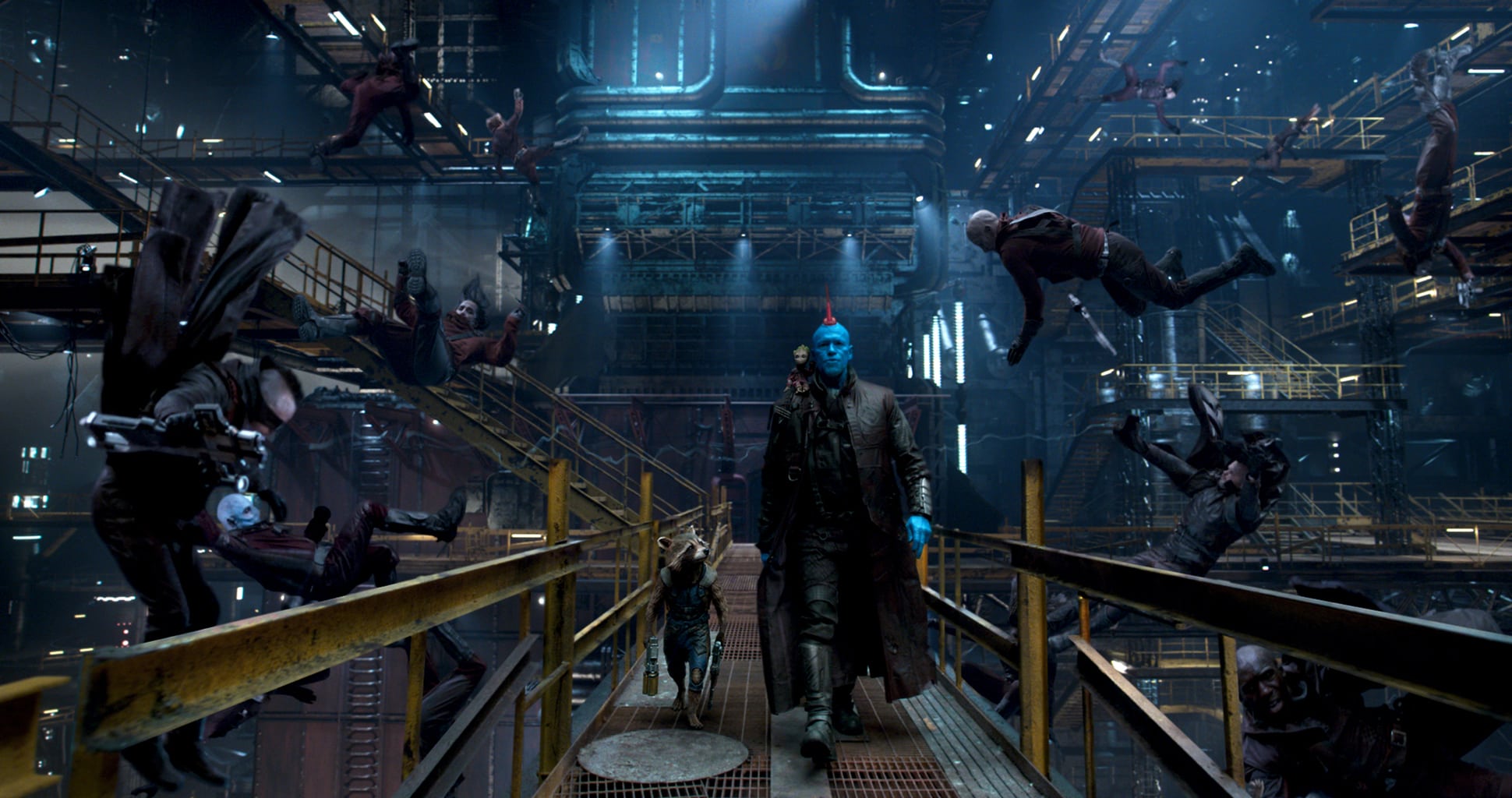 Q: We wondered if having Kurt Russell was part of the plan.

James: No. At one point Chris brought him up, and I didn’t take him very seriously. But at another point, Fred Raskin, who is our editor, brought him up.

Fred cut Kurt’s last two movies. He really liked him as an actor, and if an editor likes an actor, you know the actor is good.

Because there’s a lot of actors that cut together very well because you have to piece together their good performances and it’s actually difficult. And then people go and say, oh this person’s great.

But it takes a lot of work to get there. But the fact that Fred liked him so much was great.

Q: Why is music such an important character in this story?

James: I think that music is really the character of Peter Quill’s mom, so his relationship with his mother is through the music. And music is an important thing in my own life.

I think in the first movie, there’s another practical reason, which is that people were going into this movie, different planets, different worlds, different characters from other planets.

If you haven't seen the latest trailer, here's a taste of the music! (I've watched it at least 25 times, but who's counting?)

James: Yeah. He still is. I mean, you know, Baby Groot, he’s pretty awesome. And there are times when we’re shooting and it’s nothing.

It’s like, you know, either a little stick, or I’m describing it and then afterwards, the guys are like, 'Oh, dang. You know, the stickguy- Baby Groot’s gonna steal the whole movie.'

And he’s not even there. And I can tell you on the first movie, we were barely aware of Groot.

Isn't that crazy? Groot ended up being a favorite character!

He wasn’t that present on set, and then we kind of start putting the movie together and creating Groot, and the character really fills out once we started to create him.

But they would just forget about him. It happens in the first movie ‘cause a couple times Groot’s like, 'What- what about me? I’m over here. I want my share of things.'

And that’s really what we were treating him like. So I love Baby Groot. 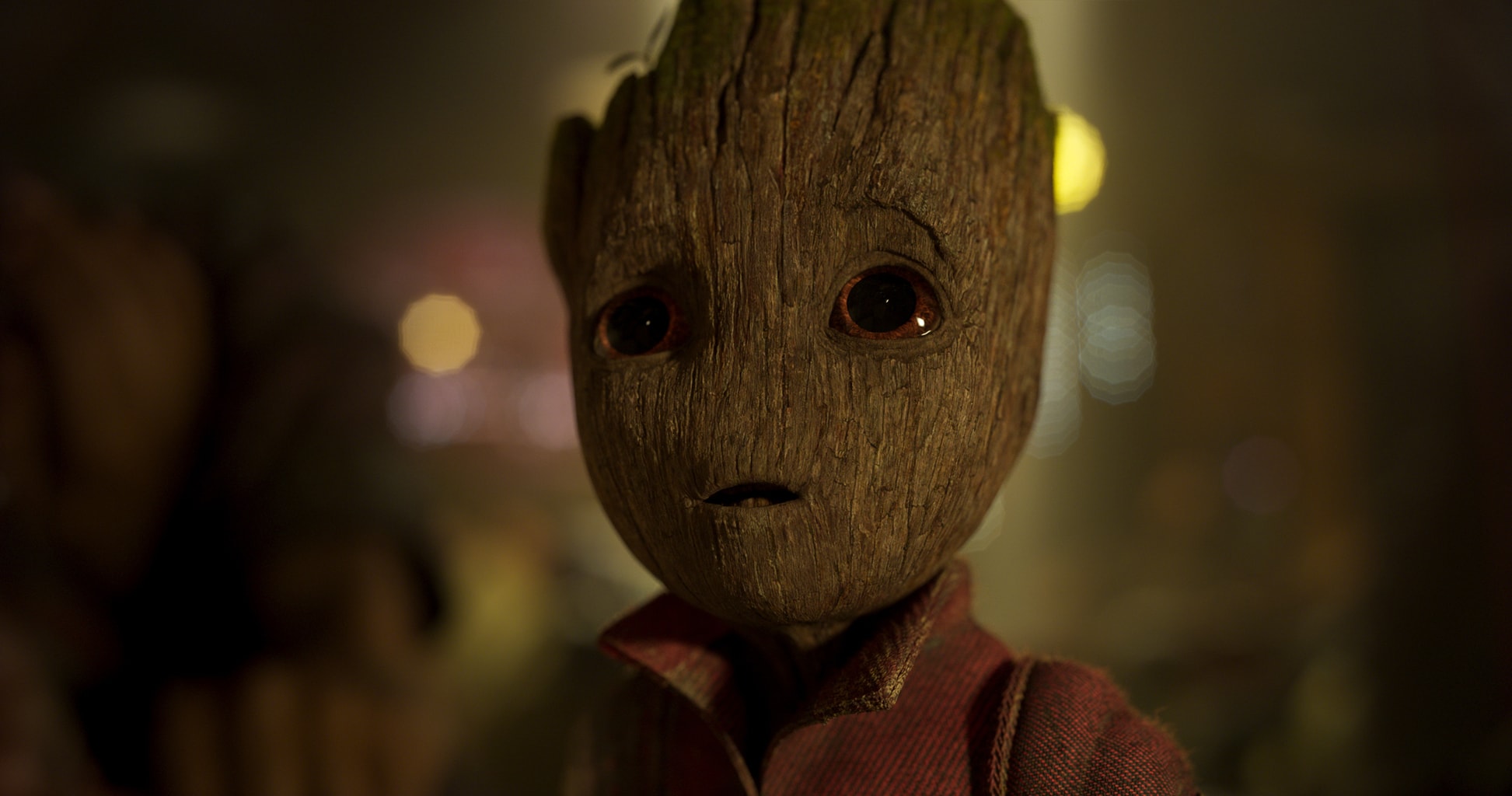 But Rocket’s the one. I just relate so deeply to Rocket. I think something that we succeeded a lot at in this film is each character has their own story.

That’s been more true for the other non-Star-Lord characters in this movie than in the first movie. And I would say especially for Gamora and Rocket. They have their very specific stories that are about them. 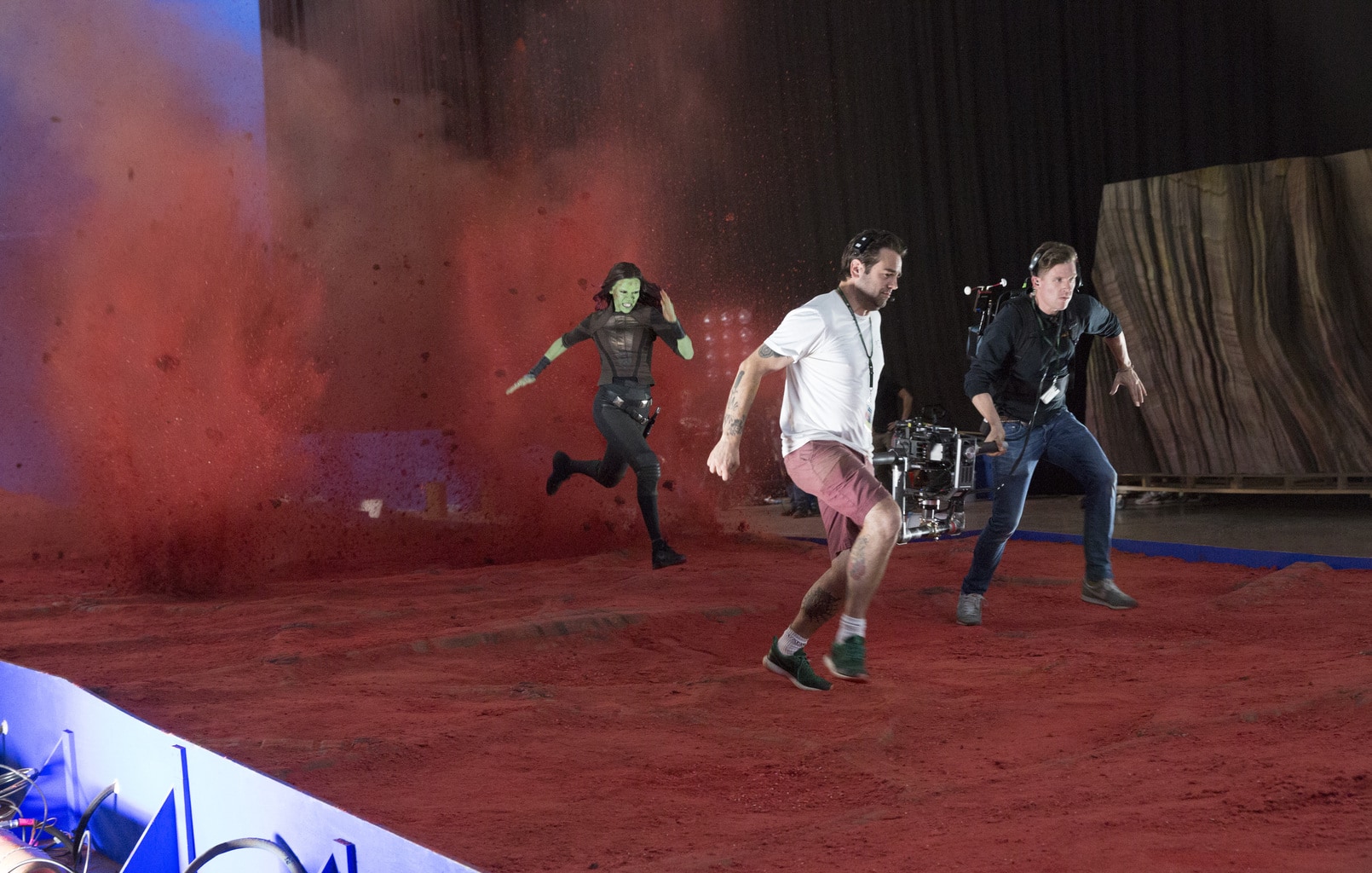 And the first story was about becoming a family, and this one’s about being a family. And so it makes a big difference.

I think in this one it’s really about Rocket. You get that first flush of accepting friendship and love which he had in the first movie.

And this movie is about being able to continue some form of intimacy, which is much, much harder for him to accept because of where he came from.

Through that, I think he forms a pretty tight bond with Yondu, who has a similar background because they’re, you know, Yondu’s an older guy who never loved. 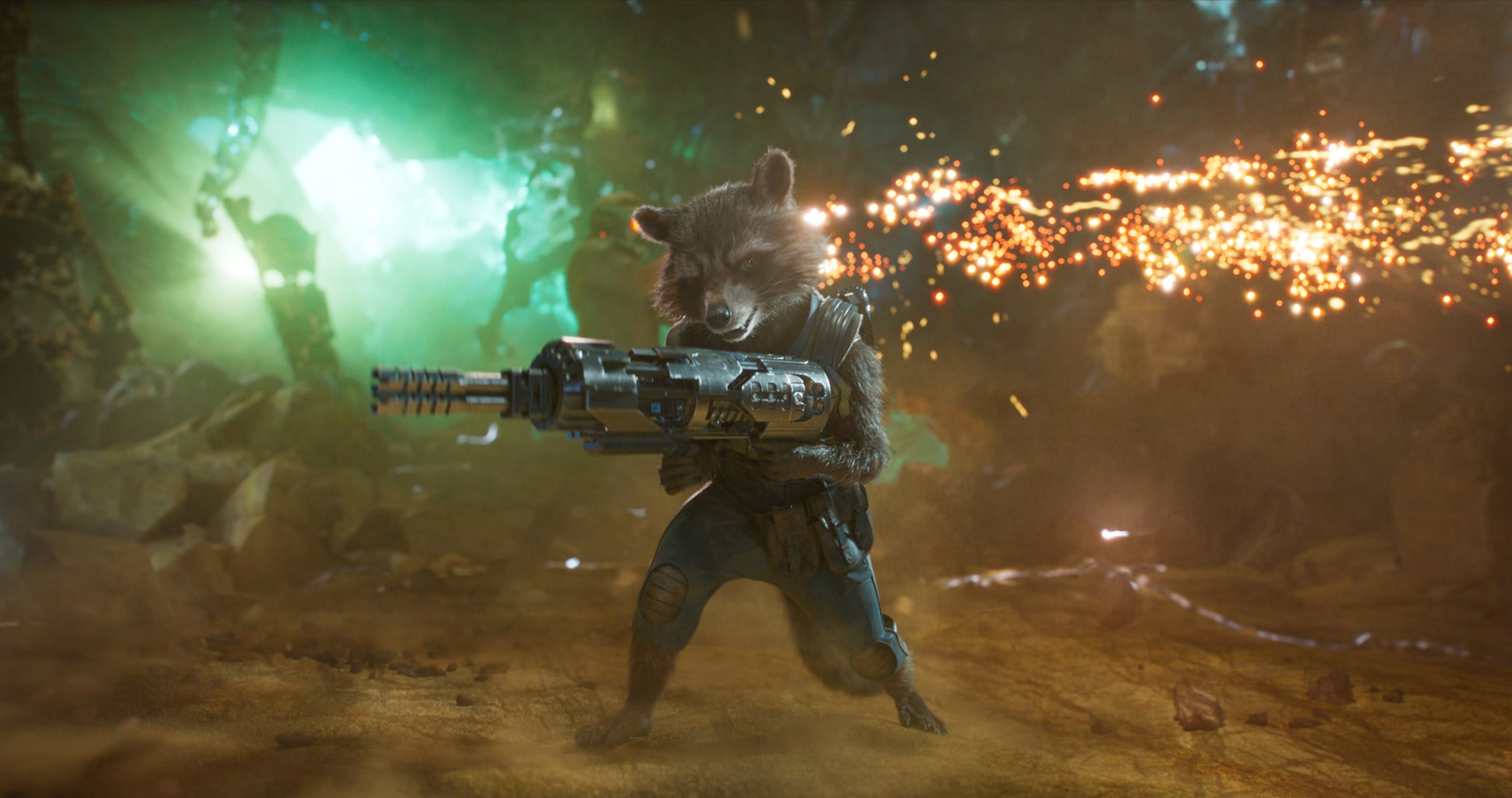 One of the great things about coming back to a second movie is you get to know the actors who play the roles. And now the roles are all tailor-fit to them.

Bautista probably had the least experience of everybody on the first movie. So he’s grown the most.

He has gotten the most better from anyone in the first movie. And the character is more tailored to him. So it’s really been great.

And then, Pom, who plays Mantis, it’s uncanny how she fits the role. She’s a very eccentric and strange character and she just sort of came in and did it. And it was like, wow!

Yeah, and I’d barely ever give her a note. Rarely ever. And for me, I give a lot of notes. 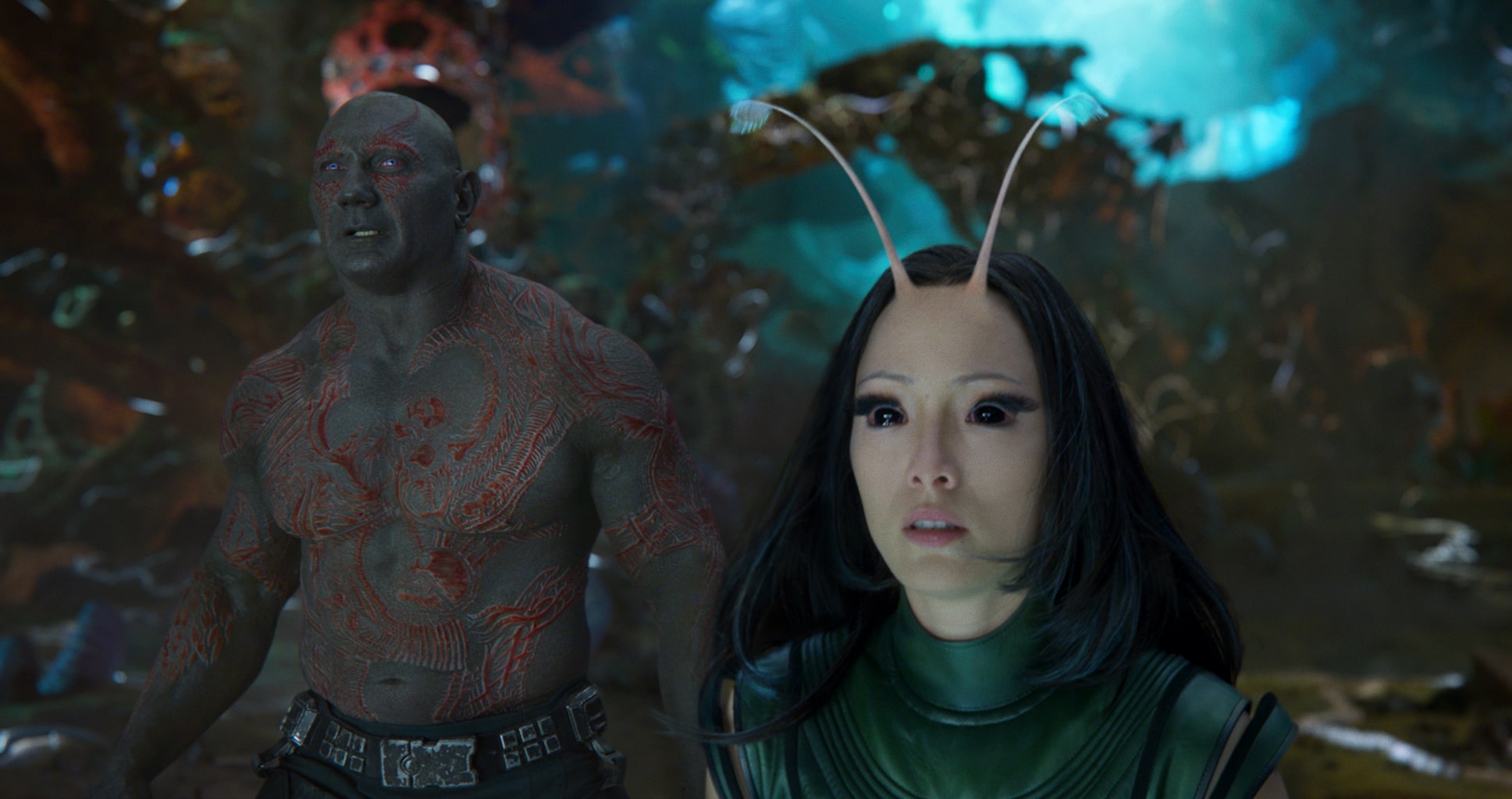 Q: What sort of message are you hoping families walk away with after watching the film?

James: I don’t think so much about what’s the message of the movie, so much as what’s the effect it has on people. And for me, the thing and the reason I make movies is that when I was a kid and I saw a great movie with my family and it made me love people more when I walked out of the theater than when I walked in.

So if there’s anything that this movie can do it’s that. I think it’s a really, truly emotional film. I think the first one was emotional, and I think we take this one to a much deeper level of emotion. 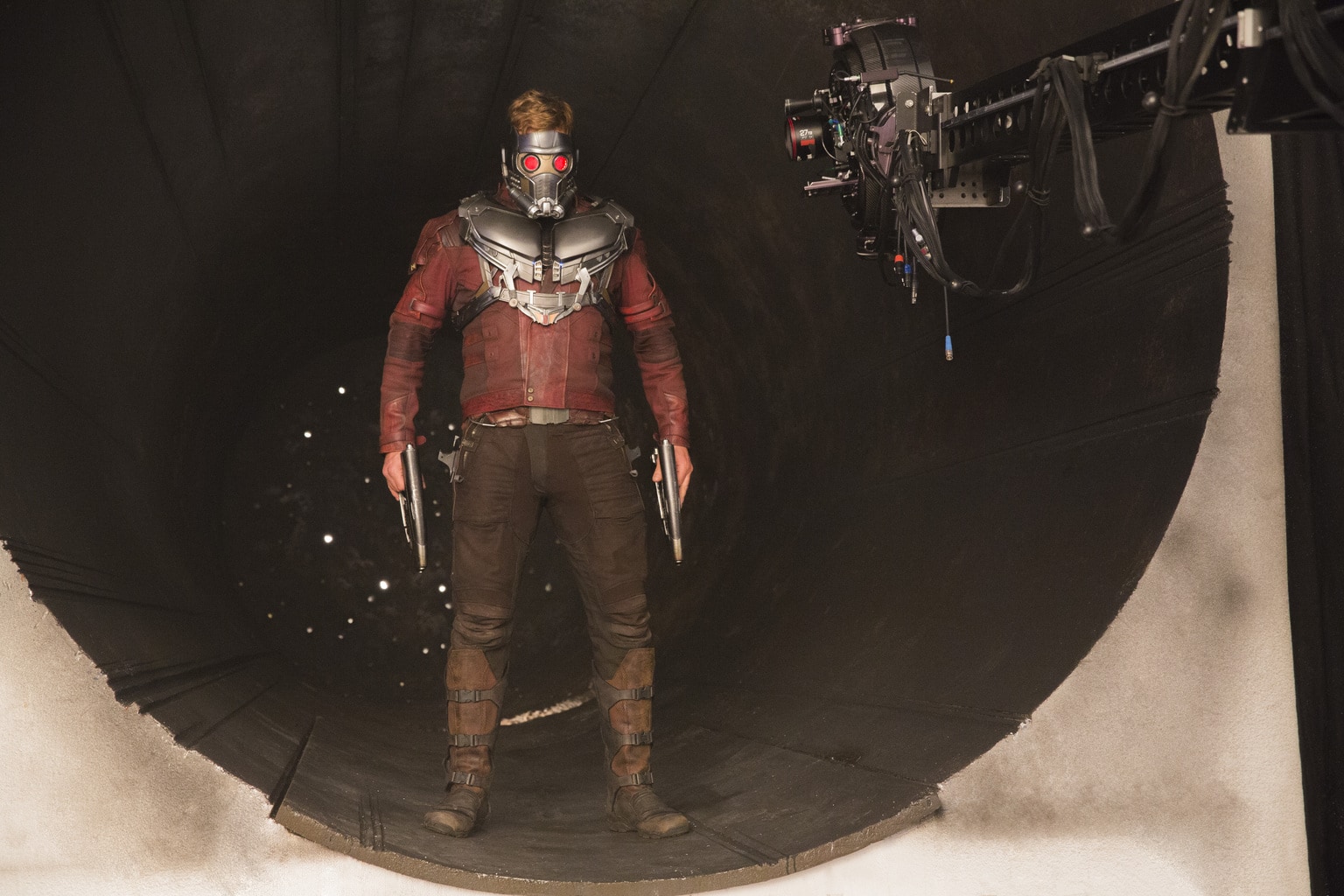 So I think that’s a big part of it. But I also think it’s a lot about the Guardians are a group of outcasts. They’re all creatures or people who don’t belong in society anywhere but with each other.

And one of the very moving things to me from the first movie is just getting, messages from all the people who feel like they’re outsiders, who relate to the Guardians, you know. Whether it’s Gamora or a lot of people relate to Drax and to Groot. 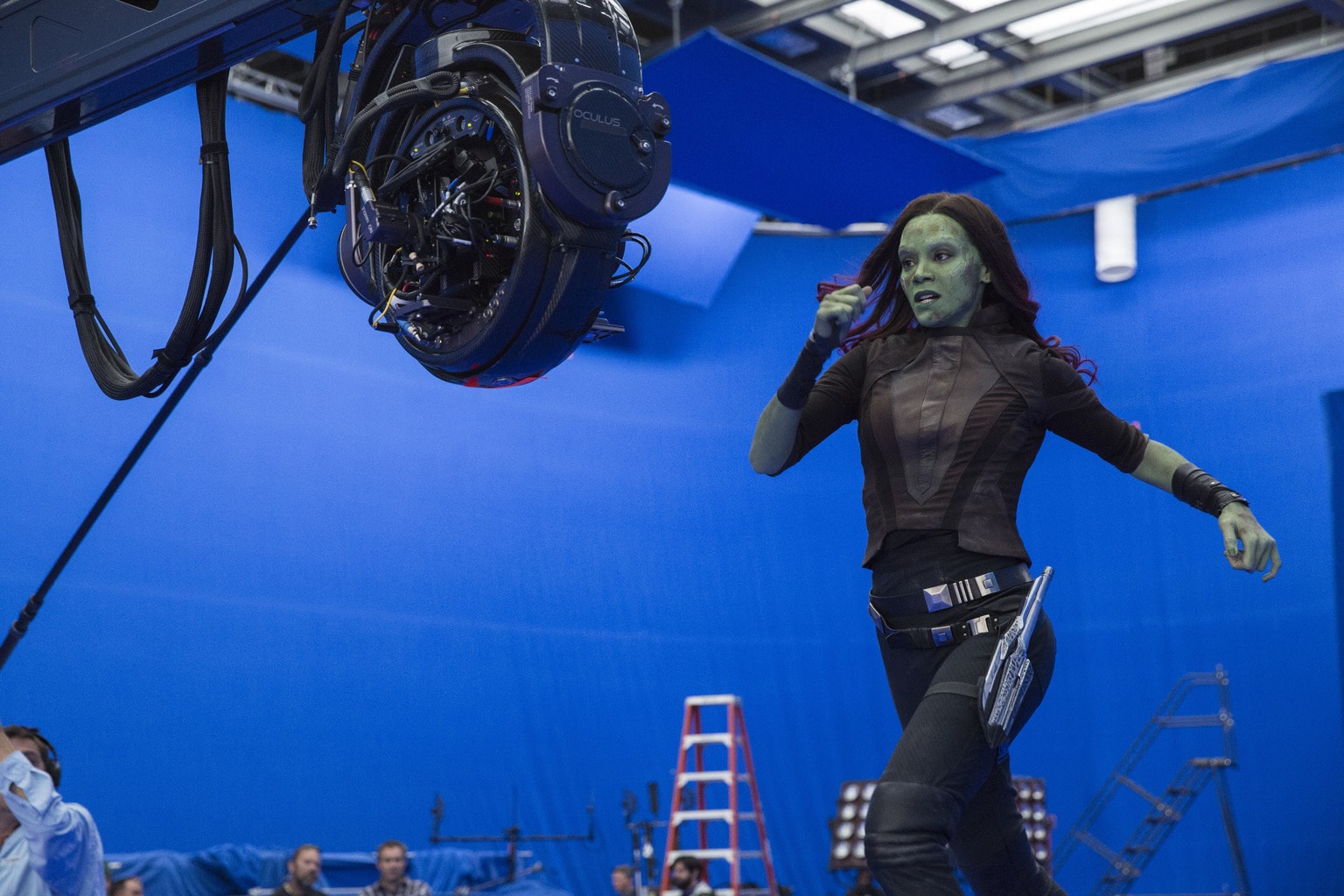 A lot of young children really relate to Groot. You know, there’s been a lot of people with autism who relate a lot to Drax because he has a very different way of perceiving the world and metaphors.

I can’t tell you, countless people that have written me, 'Thank you. Thank you for that. I don’t understand metaphors. And Drax is like me and he’s a superhero to me.' They’re outsiders and I think seeing them belong... I also think the story is a story about kids from families that are not traditional.

Being on set while they were filming was crazy. If you've never been on a movie set, there is a lot of downtime, but it's in small bits and pieces.

James Gunn rolls until they get it right, and then move on, with different props and different people. In this scene below, Michael Rooker kept waving and laughing at us as we were standing off to the side. He was so awesome.

And to give you an idea of what the final product looks like once Marvel works their magic, take a look at this on-set photo below... 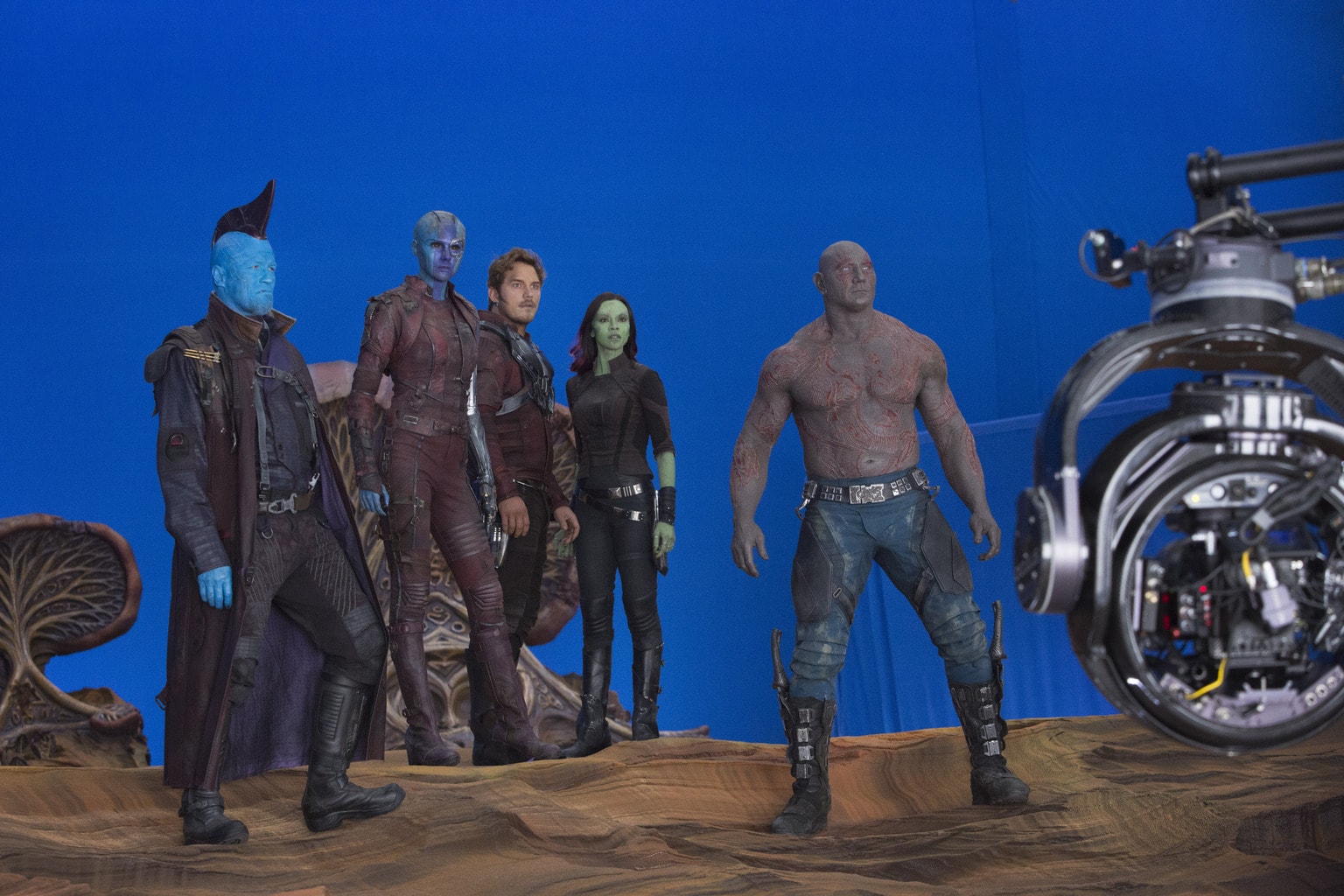 And the final product... 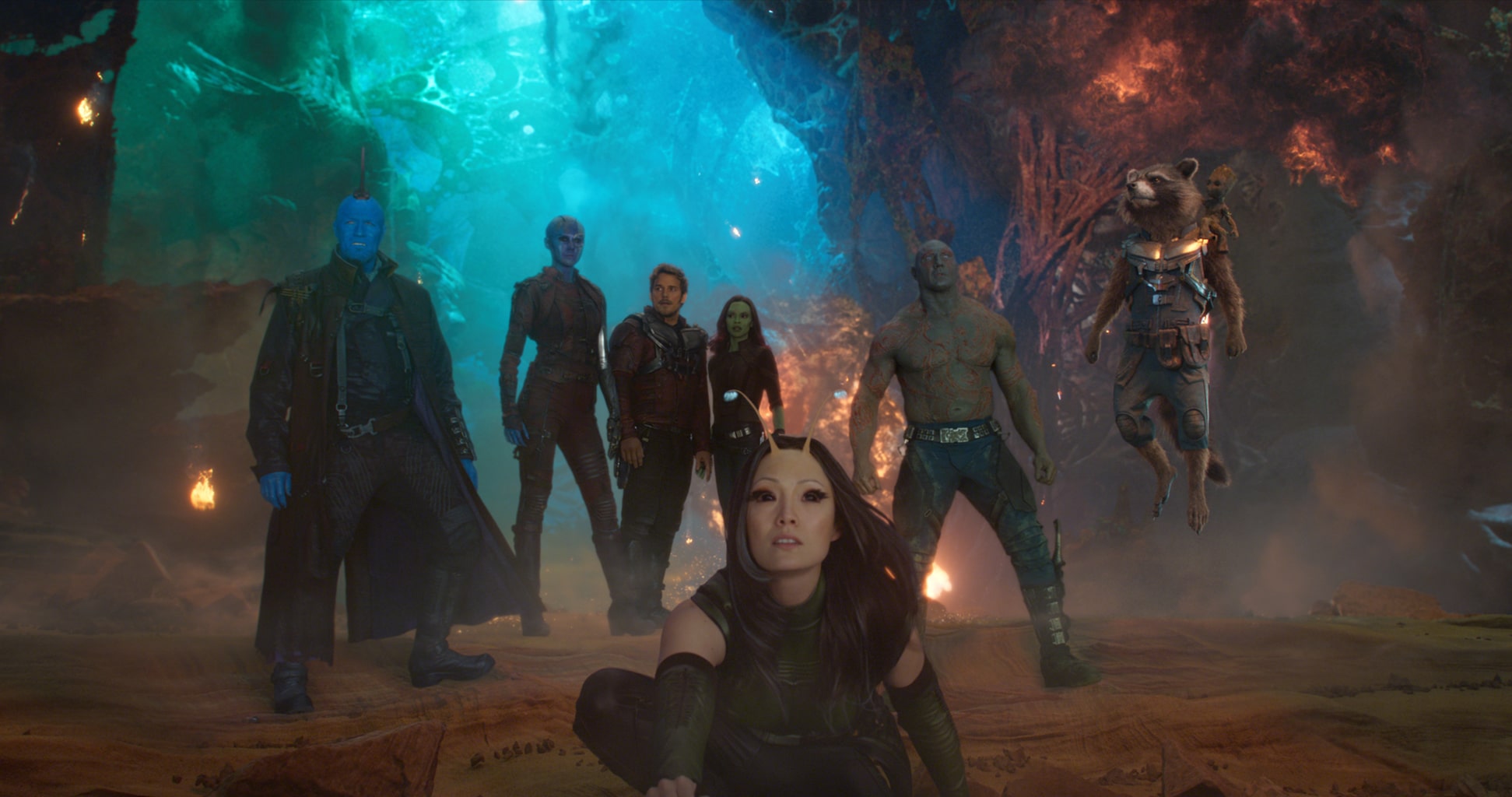 It's still hard to believe I was there! 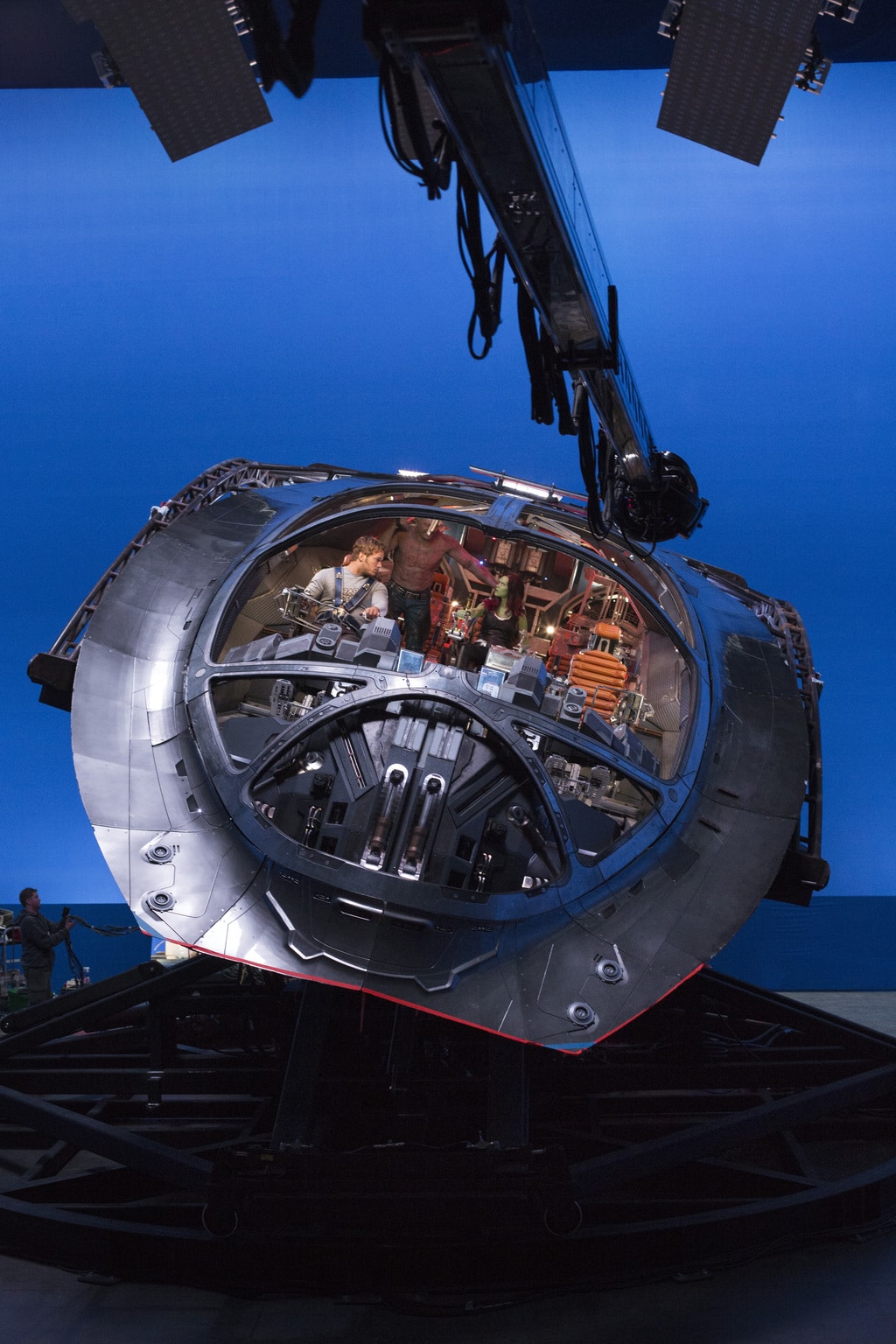 It's been said by several people throughout these interviews that the new Guardians of the Galaxy Vol 2 is about family. I think Dave Bautista, Drax, said it best, I think this one is much more about family and friendships. And when I say friendships I mean, sometimes your friends are your family, you know? And sometimes you choose your family.

Everyone wants to belong, and it sounds like this new film from Marvel is going to hit a chord with us all. James Gunn did an amazing job!

Have you seen Guardians of The Galaxy or Vol 2? I am so hoping for another film with these characters! To keep up with anything new, be sure to visit the Marvel website.

Previous Post: « Exclusive Chat with Karen Gillan "Nebula" from Guardians of the Galaxy Vol 2
Next Post: How to Spread Love Across the World »