Aasif Mandvi performing at Disney World? That one took me by surprise! But it's true! I sat down with Aasif Mandvi while I was in Hollywood for the premiere of Million Dollar Arm, and he's so easy to talk to. 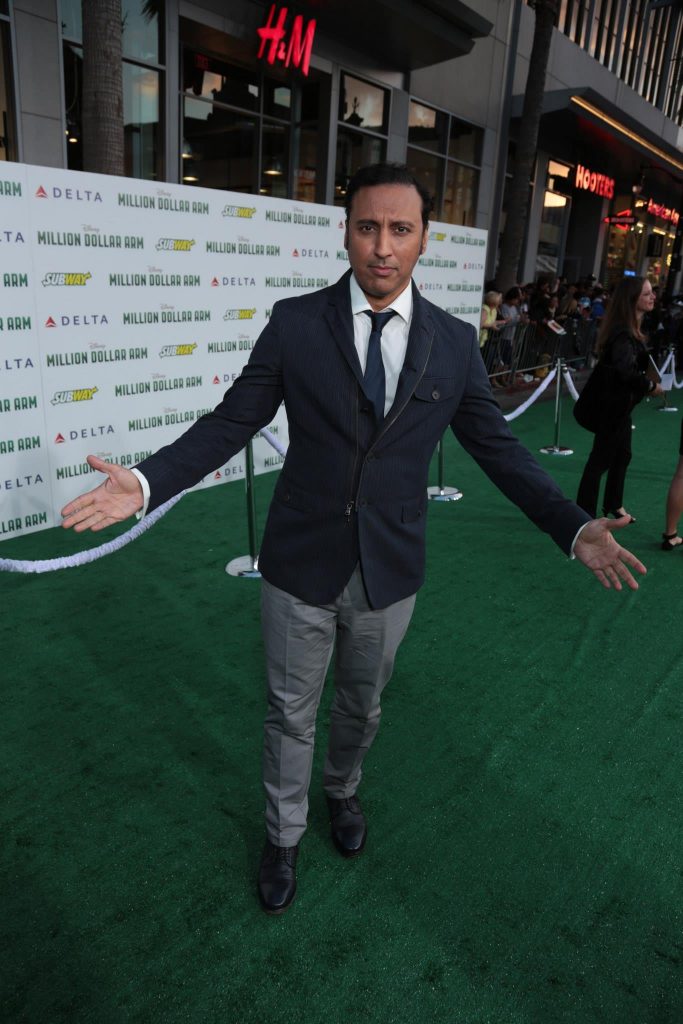 Someone in our group had learned that he had been a performer at Disney World, and we had to ask, how have those two experiences been, working for Disney?

Aasif: I was a street performer at Disney/MGM Studios and now I was in a Disney Movie so it's a very, very different experience. There's less catering involved. [Laughter] You don't get a trailer, you don't get catering, make up and hair, nothing.  No, it was great. Disney, MGM Studios was my first job out of college so it was an amazing experience... it was my first professional acting job. We sort of opened MGM Studios back in '89 and did these street performing characters. It was a great place to learn comedy and improv. I hope this is not where I end, but it's where I started. So it came full circle, right? 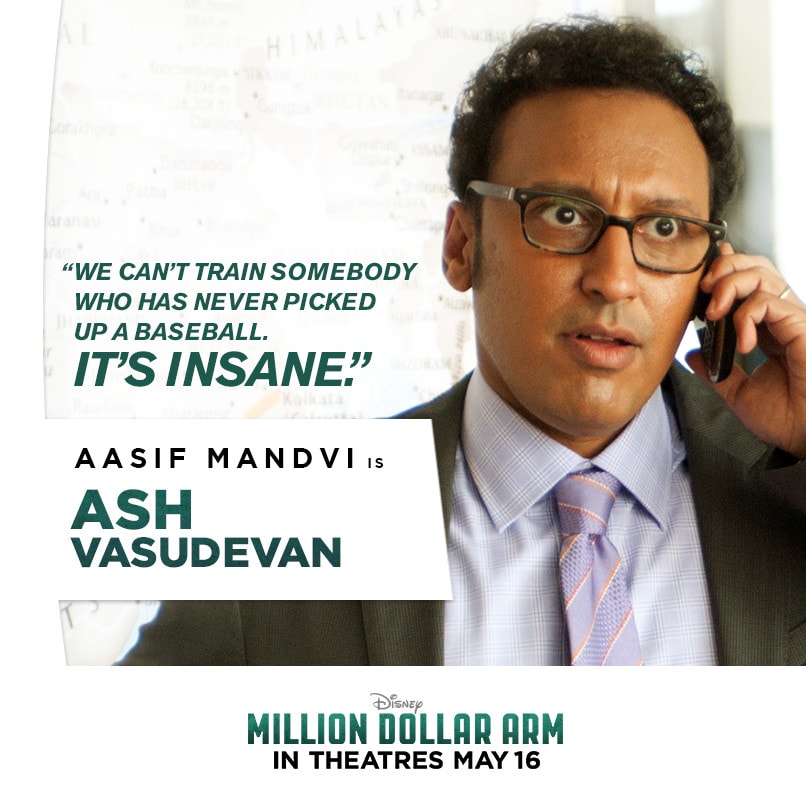 We wanted to know what his favorite part of the film was.

Aasif: It was really actually fun going to India and shooting because, having been born there...I have family there and have visited India many times... it's a whole different experience when you go with an American Film Crew to India. It's actually the best way to see India, to be in the bubble of a big Hollywood Production. You don't have to deal with any riff raff going around, you know, in an air-conditioned car and stuff. But it was great, it was actually an amazing experience to go to India, to see the Taj Mahal, which I've always wanted to and never had. And now I got to do it on Disney's dime, so it was kind of great. 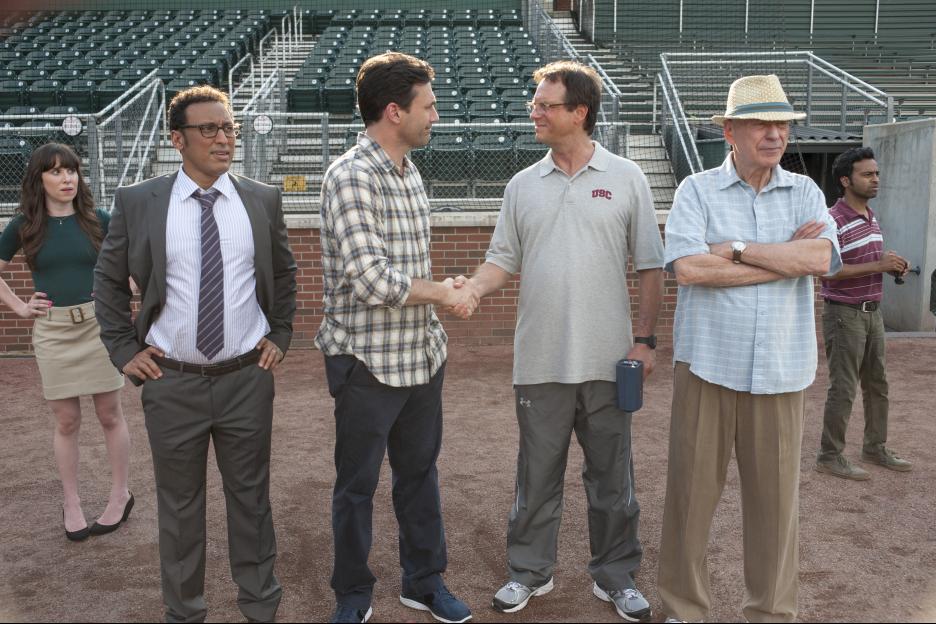 One of the bloggers in our group commented that she liked the way Aasif's character was the funny man next to Jon Hamm's straight man. We wanted to know if that was what attracted him to the character, and why he decided to do this film.

Aasif: I think he's funny, but he's also the grounding character. He's the one that sort of is the counter point to Jon Hamm's sort of playboy/Lothario character, and I like that aspect of it. I also feel like it was an interesting character to see as a South Asian sports agent because I don't know any. I'm sure there are but it was interesting to play somebody I never played before. And I got to work with Jon Hamm every day who is dreamy so... [Laughter]

In the movie, Aasif's character, Aash, is the dad of twins, so we asked how it was to work with babies while making the film.

Aasif: Oh the twins. So they had two sets, but you can't tell because they're Indian and probably look alike. [Laughter] But if you watch closely, you see that they're actually two sets. The twins I'm feeding in the Kitchen are not the same twins I'm holding on the porch. So we've got two sets of Indian parents who have these two sets of twins and they're, poor things, sort of hiding off in the corner, and the kids would just cry. And the scene was not about these kids crying, and Craig Gillespie, the Director, was like, you know, kids cry. So let him just cry because we couldn't stop them from crying. So Craig's theory was like every time we see Aash and his children, his children are just screaming. And that's just the reality of his life. So in the bed, they're crying. They weren't supposed to be crying. In the kitchen, they're crying. And then, on the porch, the kids were again, crying, and I'm supposed to be holding them, and the kid is literally screaming for his mother. He's just like, I don't care about your stupid movie, I want to be with my mom.

And finally I said to Craig, 'Listen, I can't do this anymore. This kid is like, there's snot coming out of him and he's crying. He's just a mess, you know. And Craig was like, 'We've got to get this shot, OK? Just grab him, walk out onto the porch, we get the shot, we're done. We're out of here.' So they roll 'Action!', I grab this kid, it's like pulling cheese off a pizza. He's holding on to me, I grab him like, 'Come on, Sweetie, come on. And we go running on to the porch and I'm standing there getting the shot, and then suddenly he looks at me and just puked. [Laughter] And it's just all over my clothes. And twice, he did it twice, and it's in the movie. You can see it. It's totally real. But we got the shot. 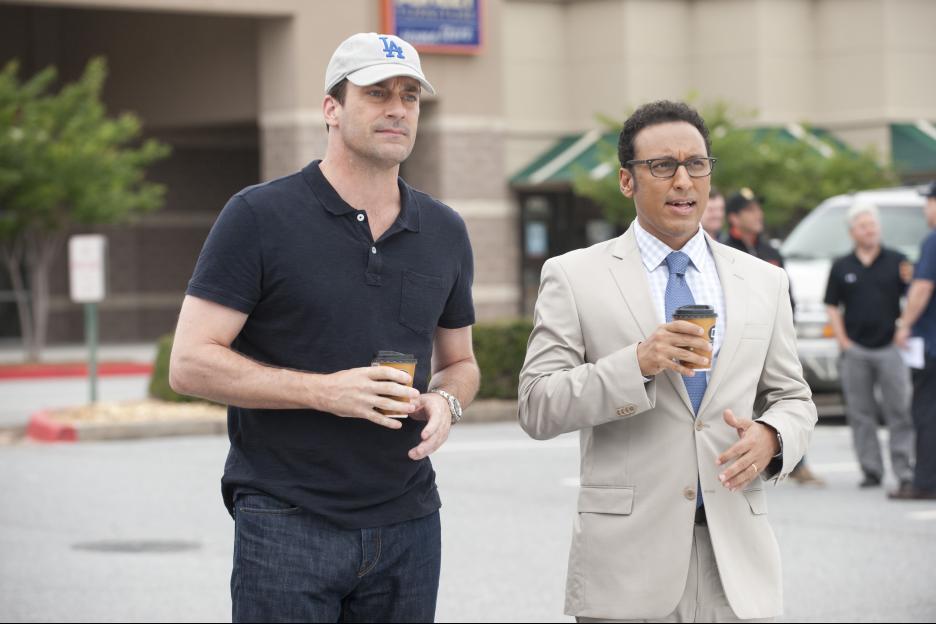 We asked everyone we met with from the movie what it was like to play a real-life person, versus a made-up character. Aasif actually knew Aash before the movie:

Aasif: We have mutual friends, so I knew Aash. And he's not married. He doesn't have kids. The real Aash is very different than the Aash in the movie so I didn't really worry about trying to portray him at all. I just created a character because the real Aash is more like JB in the sense of he's kind of like a single guy, a tough guy in San Francisco. But it was interesting to play someone who actually is a real person. I'd never done that before. Now people always  want to take pictures of the two of us together, and he's thrilled because we've known each other for a long time.

Aasif isn't a huge sports guy, so he hadn't heard of the movie before, but actually found out about it through mutual friends of Aash. We wanted to know what was on the horizon for him.

Aasif: I'm actually doing an HBO Series called "The Brink" with Jack Black and Tim Robbins so that's gonna come out next year. It's a comedy about the end of the world and sort of like like the world is on the brink of Armageddon. It's a Geo-Political Comedy. It's sort of like seen through the eyes of three Departments of US Government; State Department, Foreign Service, and the military, but it's a comedy. It's nice cause the stuff I have done on the Daily Show for years is sort of in that vein of satirical political stuff. And I have a book coming out at the end of the year. So you guys can all blog about that. [Laughter] The book is called "No Land's Man" and it's basically stories of my life from like growing up as a kid in England to moving to Florida and being a High School Student in Florida and then coming to New York, and my career. So it's sort of humorous essays. So that's coming out in November.

We asked if we could get group photo, and the guy who says he's not really a comedian, was one 🙂 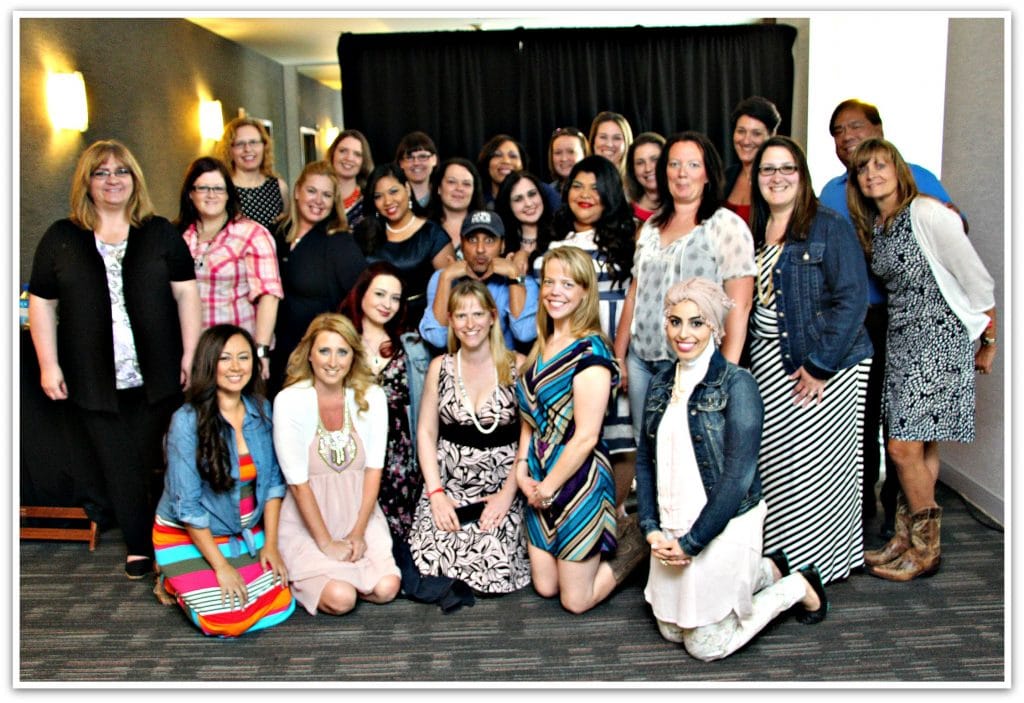 Million Dollar Arm is in theaters now. Go see it!